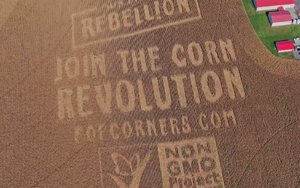 While other companies have used crop art — variations on crop circles — to promote products or causes, few have had as close an affinity with this unusual advertising format as Our Little Rebellion (OLR).

BFY Holdings (and BFY Brands) — which was formed in July 2015 when private-equity firm Permira acquired Medora Snacks and Ideal Snacks — launched Our Little Rebellion in August as a master brand for formerly Medora-owned PopCorners, plus the Bean Crisps and Crinkles brands.

Paul Nardone, a former CEO of Annie’s Homegrown who became BFY’s CEO in August 2015, has been expanding the brands’ distribution. They’re now available at conventional retailers, natural food stores, and club and convenience stores across the U.S., as well as online retailers, reports BFY. PopCorners is also distributed on JetBlue flights.

According to the company, the farms supply 20 million pounds of corn used in Our Little Rebellion’s snacks, and will also make more Non-GMO Project Verified corn available “to food and beverage manufacturers across the U.S.” However, citing proprietary reasons, the company declined to say how many total pounds of corn the 59 farms produce, how much will be available to other food and beverage companies, and which other companies are using the supply source.

In addition to promoting the snacks, the crop-art billboard is intended to increase awareness and support for non-GMO corn and the family farmers who cultivate it. The company cites a U.S. Department of Agriculture estimate that only about 8% of the corn acreage in the U.S. is non-GMO.

The crop ad was created in October (designated “Non-GMO Month”), in a non-GMO cornfield in Nebraska, through a partnership between the snack maker and the Non-GMO Project. It features their logos and urges viewers to “Join the Corn Revolution” by visiting PopCorners.com.

The site offers six ways to “keep the non-GMO revolution alive,” and a link to the Project’s “Living Non-GMO” site. It also includes a video (embedded below) showing the creation of the crop art, which was hand-cut by 15 people over a week, and a second video featuring the family farmer whose land is hosting the crop art.

The company isn’t sure how many planes fly over the field with the crop ad, but reports that the “grassroots stunt” is being supported by a “national media blitz” that is generated 50 million-plus in its first few days.

Time-lapse video and drone footage of the crop billboard are being promoted on the company’s and the Project’s social media channels. Our Little Rebellion is also running advertising on Facebook and other social platforms.