Despite One Critic's Pans, Three CBS Shows Are Doing Fine 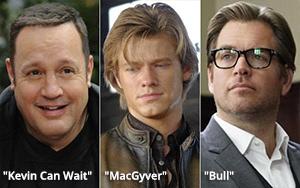 A TV critic railed against three new CBS shows, but the viewing public has taken to them anyway.

That TV critic was me, and the three shows are “Kevin Can Wait,” “Bull” and “MacGyver.” All three were deemed by CBS to be doing well enough so far in the new season to earn orders for a full season’s worth of episodes -- nine new ones in addition to the 13 they already ordered for a total of 22 episodes each. CBS made the announcement on Monday.

No harm, no foul. Sabotaging or otherwise setting up a TV show for failure is not the goal of a TV review. A TV critic’s job is simply to critique TV shows. It’s just one guy’s opinion. How the TV shows fare after a critic has his say has less to do with the critic’s opinion than the way the show is developed, produced, scheduled and promoted.

Certainly, some readers might be dissuaded from sampling a show because of what a TV critic says about it. But in the main, I have found that regular people who are not required to be critical, cranky or contrary every time they sit down to watch a TV show will find what they like all on their own, regardless of what a critic says.

On their own, TV critics don’t have that much power, anyway. For a show to fail due to critical opinion, the pans have to be more or less unanimous across the entire community of TV critics for them to have any weight. Moreover, TV networks are powerful. They maintain large publicity departments and they have their own airtime in which to air promotion spots that reach millions.

Plus -- and I have owned up to this repeatedly in my career -- the people who make the programming decisions at TV networks often have a better feel for what will work than I do. All I can do is express a very personal opinion liking or disliking something. I am not responsible for making decisions that will then require the parent company to invest millions of dollars.

So, the powers-that-be at CBS green-lighted “Kevin Can Wait,” “Bull” and “MacGyver” -- three shows whose premieres were reviewed negatively here.

My review of the premiere episode of “Kevin Can Wait” -- the new Kevin James sitcom airing Monday nights -- called the show a “mess” in the headline. The column, published on Sept. 14, then went on to blast everything about the show, including the set, a character’s name, and lapses in taste that had the Kevin character and his wife insulting an elderly woman and a man struggling with alcohol addiction.

The following week, in a review posted here on Sept. 20, I labeled “Bull” a bunch of bull both in the headline and in the text. My review focused on the exaggerated “genius” of the Bull character (a jury consultant modeled after the real-life Dr. Phil), the clichéd nature of the supporting characters, and the obvious, never-in-doubt outcome of the show’s first storyline.

I felt the show would go nowhere, but it has scored ratings sufficient to earn a full-season order -- a 2.1 rating in the demo last Tuesday, and total viewership of 13 million, coming out of “NCIS.”

As for “MacGyver,” my review published on Sept. 22 focused on a number of shortcomings, including the insistence on the part of CBS that every character in its drama shows be the world’s greatest genius or expert, several scenes in which elements of logical storytelling were conspicuously missing (such as MacGyver dodging bullets by diving behind a couch), and even an African-American character who was positioned as MacGyver’s manservant, as if “MacGyver” was an old Charlie Chan movie. As it happened, this African-American character was the show’s only non-genius character too.

Apparently, these flaws didn’t register with other people. Last Friday, “MacGyver” scored a 1.1 rating in the demo (this is considered respectable) and attracted total viewers amounting to 7.44 million at 8 p.m. Eastern. This too earned it a full season of episodes.

Let the record show that I have no illusions about the negative reviews I write sometimes here. They are not meant to be predictors of a show’s success or failure. And I am rarely surprised anymore when many people disagree.