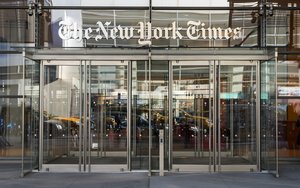 The New York Times’ management is battling with its largest union over wage gap issues. A May study by the NewsGuild of New York revealed that unionized minority employees at the Times are earning 10% less than the average wage, and that women earn about 7% less than men.

The union represents over 1,000 NYT employees.

The Guild study -- conducted by researchers at its parent union, the Communications Workers of America, and released in May -- showed that men hold the highest-paid jobs at the newspaper.

It found that minority workers are “vastly over-represented in the lowest-paid jobs,” such as news assistants and help desk analysts, and are under-represented in roles such as reporters, critics or sales planners.

The NYT conducted its own study, and on Friday, executives said in a memo that they found “no evidence of discrimination in how employees are compensated in the groups examined,” according to a report from Politico’s Morning Media.

"The union's analysis ... assumed that any difference it detected in pay between men and women, or employees of color and white employees must be the product of discrimination, and there was no effort to determine whether any differences could be explained by non-discriminatory reasons," wrote publisher Arthur Sulzberger Jr., CEO Mark Thompson and executive editor Dean Baquet.

"There are, of course, many legitimate factors that affect compensation that have nothing to do with discrimination: They include nature and scope of work, tenure in the role, performance, experience and competition for talent in the relevant labor market in a given period of time."

The Guild responded Monday, expressing frustration that the NYT released its own study without initiating an “open dialogue” with the Guild and that the Times’ response failed to address the union’s findings.

"'No evidence of discrimination' doesn't address the fact that pay equity is a problem at the Times… The company's posturing about not discriminating doesn't make the inequities disappear,” the Guild stated.

The newspaper's management admitted that the company needs “to do a better job explaining to our employees the process by which compensation is set across the company.”

The company plans to adjust pay for “a small number of employees,” but did not elaborate.