Auditor Finds Only Half Of Clients Have Discussed Transparency With Agency 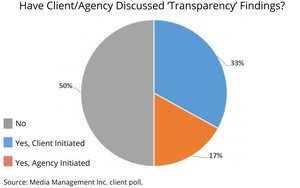 In the months since media-buying “transparency” has become a flashpoint between advertisers and agencies, half of all clients say there has been no communication with their agencies over the subject. Among the half that have discussed the issue, clients have initiated those conversations by a margin of two-to-one of their agencies.

Those are the findings of a “quick poll” conducted among its clients by media-buying auditing firm Media Management Inc. (MMI). The findings, which are being released today on the opening day of the Association of National Advertisers’ annual Masters of Marketing conference in Orlando, are likely to be more fuel for what has proven to be the ad industry firestorm of 2016.

Asked how “aware” they were of the ANA’s transparency study as well as its recommendations for fixing issues revealed by it, the vast majority (83%) of MMI’s clients said they were either “very” or “somewhat” aware of it.

In a blog post unveiling the findings, MMI said the fact that only half of clients have had any communication with their agencies about the issues is the most important issue.

“This lack of communication in many cases should not be interpreted as laissez-faire on the part of advertisers, however,” the post states, adding, “Most express multiple areas of concern over media agency transparency, and most intend to take some kind of action on this issue if they have not already.”

In fact, when asked which area of media transparency was the greatest concern for them, a majority (56%) cited “all of the above.”

The biggest individual concern, cited by 21% of respondents, was “undisclosed/non-returned rebates” paid to agencies by media suppliers, followed by “transparency issues in digital media” (20%), and “principal-based agency buying activities” (3%).

Only 9% of respondents indicated that they have not taken action to date, and do not intend to do so within the next six months.

The findings are based on completed surveys from 36 of 123 MMI clients invited to participate. They surveys were completed during the week of October 10.
Next story loading