The New Thigh Gap: Not Having Joints 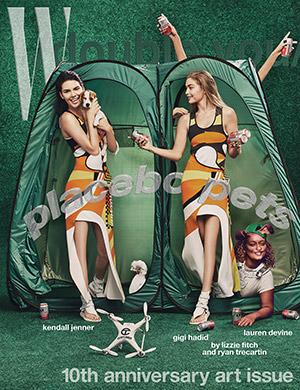 Hey ladies, want to know about the new ludicrously unrealistic expectation for your appearance? Sure you do! If you thought the “thigh gap” trend was crazy, you better get ready for the new thing: no knees!

That’s right, knees are ugly – no, I’m not talking about any particular kind of knees, and not just the dry skin covering your knees, although that’s ugly, too. All knees! All knees are knobby and gross and they have to go.

In fact, while we’re at it, your elbows and basically all your other joints are gross too. That really goes for any feature that serves to interrupt the smooth, undifferentiated field of pure creamy skin that is the essence of beauty.

At least that seems to be where W magazine is going with the unabashedly bizarre cover image (at a certain point one hesitates to say “photograph”) of Kendall Jenner and Gigi Hadid for its 10th anniversary art issue.

As some astute observers have pointed out, the magazine has Photoshopped their knees out of existence, giving their legs the appearance of long, sensuous hotdogs, well-moisturized tentacles, or hastily produced mannequins.

Whether deliberate or not, it’s true there’s something captivating about their kneeless legs.

After all, what could be more exclusively elite than a bodily feature which no amount of exercise, dieting, or plastic surgery could ever achieve in reality? Which would, in fact, make most forms of exercise impossible? What could be more aspirational than something that is categorically unachievable?

(By the way, anyone who opens the magazine to take a peek at the full photo shoot, which depicts the celebrity friends as “super friendly, domesticated humanoid pets,” is in for a very weird experience. Apparently, when W’s editors think of “art,” their minds immediately jump to Hieronymus Bosch).

If we could just do something about their fat, disgusting elbows.
celebrity, fashion, magazines
2 comments about "The New Thigh Gap: Not Having Joints".
Check to receive email when comments are posted.
Read more comments >
Next story loading