Network With A Plan: CBS Monday Sitcoms Are Nearly Identical 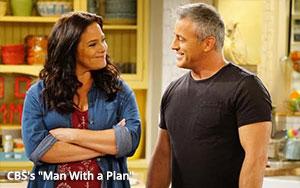 CBS is hatching a new strategy to create cohesion on its Monday sitcom lineup: Lead off the night with back-to-back comedies that are almost identical.

While watching the first two episodes of the newest one of the two in advance of its premiere tonight (Oct. 24) -- “Man With a Plan” starring Matt LeBlanc -- I played a game with myself. At various times, I would close my eyes and imagine Kevin James reciting some of LeBlanc’s lines.

It was incredibly easy to visualize, right down to the cadence of their delivery. In this “game,” the two actors and their characters were virtually interchangeable. I then wondered whether the same people were producing and writing these shows.

They were not, which led me to the conclusion that the common denominator here is not the creatives in charge of “Kevin Can Wait” and “Man With a Plan,” but the programming department at CBS, which seems to have invented a machine for turning out cookie-cutter comedies.

This is the week CBS adapts to life after “Thursday Night Football.” With no more games on Thursday night for the remainder of this season, the network introduces a regular programming lineup this Thursday (Oct. 27) anchored by comedies, starting with “The Big Bang Theory” (moving from Monday), then a new one called “The Great Indoors” (with Joel McHale), followed by “Mom” and “Life in Pieces” returning for their new seasons, and then a new drama called “Pure Genius” to end the night.

With “The Big Bang Theory” moving out of the lead-off position on Monday night, CBS is moving “Kevin Can Wait” into the time period to serve as a lead-in for the new LeBlanc comedy, “Man With a Plan,” at 8:30 Eastern. The rest of the Monday lineup remains as is: “2 Broke Girls,” followed by “The Odd Couple” and “Scorpion.”

So how are “Kevin Can Wait” and “Man With a Plan” almost identical? They’re both about middle-aged guys who have suddenly become stay-at-home dads. In “Kevin Can Wait,” James plays a Long Island cop who is recently retired.

In “Man With a Plan,” LeBlanc plays a macho Pittsburgh contractor who takes on the responsibility of caring for his three children when his wife goes back to work as a hospital nurse. The explanation for this is that as a contractor, he has a “flexible” schedule. (Now that’s funny.)

See the photo above from “Man With a Plan”? It encompasses all you need to know about this show. It’s the stereotypical “sitcom wife with arms folded” publicity photo. It shows that she’s the smarter of the two when it comes to child-rearing and household management. The husband is well-meaning, but largely clueless.

The LeBlanc husband -- a man named Adam Burns -- is at least marginally more mature than the husband Kevin James plays in “Kevin Can Wait.” But they both spar with their wives and cope with their kids. Let the record show that the kids in each family are not necessarily identical. They vary in age, but the number is the same -- three in each family.

Like “Kevin Can Wait,” “Man With a Plan” is one long cliché, right down to the title. As far as I can determine after watching the first two episodes, Adam Burns has no discernible “plan” for anything. The title is basically meaningless, in the fashion of an earlier era in TV sitcoms when they had titles like “Too Close for Comfort” or “Gimme a Break,” in which the titles were little more than just phrases people commonly used.

Yes, I know -- the titles of the two old sitcoms referenced above did have some vague connection with what the shows were about. This “Man With a Plan” title is just as vague, if not more so.

In two episodes of “Man With a Plan,” I never laughed once. It’s almost as if these new comedies are not really comedies at all. They’re just half-hour shows about families whose entertainment value (if any) is supposed to spring from their familiarity. They are designed so that audiences will identify with them. Generating real laughs seems to be beside the point, although “Man With a Plan” has a laugh track that is so persistent you would think this show was the funniest thing since the Marx Brothers.

It’s not, but how could it be? It’s just another TV sitcom about a dopey dad, a wise mom, their bratty children and their everyday lives. These things hold zero appeal for me, but as I have asked many times in these TV blogs: What do I know?