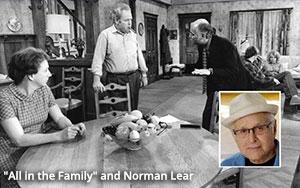 Maybe Norman Lear should have named his book “I Should Live So Long.”

Not to take anything away from his achievements in the 1970s, but Lear’s recent round of accolades seems to be based as much on his longevity as on his success in the television business.

He is now 94. A year ago, when he published his memoir called “Even This I Get To Experience,” he was 93. Suddenly, Lear was everywhere --- turning up on talk shows and stages all over the place to be interviewed.

Portions of this publicity tour are seen in the documentary “Norman Lear: Just Another Version Of You,” which comes to PBS Tuesday night (Oct. 25). One wonders whether this documentary would even have been made if Lear had no longer been around to take this late-in-life victory lap.

First seen in limited theatrical release last summer, “Just Another Version of You” was scooped up for its TV debut by PBS’s “American Masters” series. It feels right at home on “American Masters,” where the majority of biographical documentaries the series airs are less like actual biographies and more like “celebrations” of their subjects’ lives.

In the journalism business, we call such profiles “puff pieces,” and this documentary on Lear is no exception. With Lear’s enthusiastic participation, this 90-minute film tells his life story -- from his boyhood in New Haven, Connecticut through his military service in World War II and then on to his television career.

Betcha didn’t know that Norman held a series of writing jobs for some of TV’s top entertainers before he hit his stride as a show-runner in the 1970s. These giants of TV’s first 15 years included Martin and Lewis (Dean and Jerry), Martha Raye, George Gobel, Andy Williams and Tennessee Ernie Ford.

Ford’s famed recording of “Sixteen Tons,” a song about coal miners, becomes a recurring piece of theme music in the documentary, seemingly for no apparent reason other than that it’s a catchy tune.

Also in this documentary for reasons that are not at all clear are George Clooney, Amy Poehler and Bill Moyers. They all seem to be acquainted personally with Lear, but the documentary doesn’t really explain their roles here, other than to heap even more praise on Lear.

At one point, Poehler declares “All in the Family” to be “the best show on television ever!” -- testimony that could have come from anyone. Similar testimony that was just as unnecessary comes from Phil Rosenthal, co-creator of “Everybody Loves Raymond,” who calls Lear “the most influential producer in the history of television.”

This claim is not thoroughly proved in this documentary, but if there is such a title of “most influential producer” in TV history, then Lear can probably stake a pretty strong claim to it. As the film points out, at one time in the 1970s, 120 million watched his shows every week. At one point, six Lear shows were in prime-time’s top 10 shows.

One celebrity in the film who appears to have no personal relationship with Lear or Lear’s story is Russell Simmons. He provides a fascinating and eye-opening point of view on two of Lear’s shows -- “Good Times,” about an impoverished but striving African-American family living in the Chicago projects; and “The Jeffersons,” about a black man who becomes so prosperous in the dry-cleaning business that he and his wife can afford to live in an apartment in a high-rise on Manhattan’s Upper East Side.

In an interview in the documentary, Simmons characterizes “Good Times” as a show about blacks for white people, while “The Jeffersons” was the more important of the two Lear shows for African-Americans because it showed a successful black man who was no longer striving but had already arrived. For Simmons, the show was aspirational and also a little bit angry (as symbolized by the combustible George Jefferson played by Sherman Hemsley). Simmons said he even learned how to walk by watching George Jefferson

Fortunately, some of the other interview subjects in this film were on hand to bear witness to portions of the Lear story, including Rob Reiner, co-star of “All in the Family”; and John Amos, co-star of “Good Times.”

The best parts of this documentary come in what you might call the movie’s second act -- when Lear’s 1970s shows are examined and their stories told, starting with “All in the Family.”

It’s a fascinating glimpse of how network television worked in an era that seems more like ancient history with each passing year. It’s an era that might already have been forgotten if Norman Lear hadn’t lived so long.