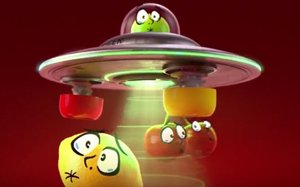 Musselman’s, which competes with pouched apple sauce leader GoGoSqueeZ, is looking to differentiate itself with the kid-friendly sour line — a first in the category. Sour (the new line offers cherry, raspberry and lemon varieties) is also currently a key flavor trend in food and beverages in general.

The campaign — from Pittsburgh-based Brunner, with animation by CHRLX, New York — features three, 15-second TV spots showing the fruit characters engaging in “sour-cising,” in training with a “sour-power dojo,” and being abducted by a “flying sour-cer” (below).

The characters are also featured on the pouches, to underline that the sour products are meant for kids.

Primarily targeting moms of kids ages six through 12, the ads are being aired on programming with potential for viewership by kids, as well, including Today, Good Morning America, Live with Kelly, Ellen and Rachel Ray.

The schedule, which spans all traditional networks, plus Hulu, will roll out over this year and next across 18 markets, primarily in the Northeast and Midwest, from Portland, Maine, to Kansas City, Mo.

The campaign’s social media element includes being featured in a current “tips for active families” sponsored posting (#squeezablesours) on the Thinking Outside the Sandbox (TOTS) Family blog.

Musselman’s, which produces a variety of apple-based products, is a division of Pennsylvania-based Knouse Foods Co-op, comprising 150 fruit growers from the Appalachian Mountains to the Midwest.