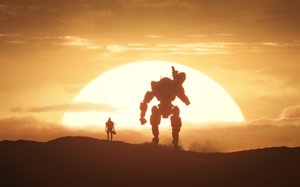 Respawn Entertainment and Electronics Arts are launching the Titanfall 2 videogame with a campaign that reimagines a Sonny Bono song as a haunting ballad between man and machine.

Developed with agency Argonaut, the campaign captures the game's relationship between two key players - Pilot and Titan - as they team up to uphold a mission behind enemy lines. Lyrics from Sonny Bono's "Bang Bang (My Baby Shot Me Down)" sung by Australian singer Grace include “From one fight to the next, two of us ride with weapons flexed. One is quick, the other’s tall. Together, they’ll kill them all,” sings the musical narrator. “Bang bang, they shot them down. Bang bang, they hit the ground. Bang bang, they nuked the rest. Bang bang, with lasers from their chest.”

“So, what better way to celebrate this legendary duo than by re-creating a classic ballad that tells the tale of our two war-torn heroes and the trail of dead they have left in their wake," says Hunter Hindman, founder and co-chief creative officer, Argonaut. "To bring this world to life visually, we asked ourselves, what if Sergio Leone showed up in the futuristic Titanfall frontier with his film crew? How would he frame up the story of a man and his 20ft-tall mechanical steed? We wanted to create a world where our heroes and their landscape could be treated with the same cinematic reverence he would have brought to the table.”

Creative can be viewed here.

The campaign will run nationally on networks including ESPN, TBS, Syfy, and MTV. The YouTube clip has already received more than 400,701 views. The game, crafted by one of the co-creators of Call of Duty and other key designers behind the Call of Duty franchise, is out October 28.