Teads Dives Into Haptic Technology Via Test With Immersion 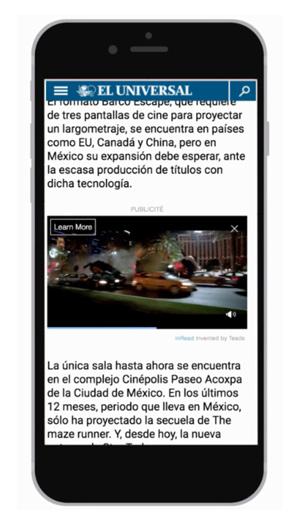 In haptic technology, there is a small motor in the phone that creates vibrations enabling people to experience literally thousands of unique sensations at their fingertips, according to Todd Whitaker, vice president, marketing, Immersion, a provider of touch feedback technology. The technology is used on smartphones to create mobile experiences people can actually feel. The company has integrated the technology into ad campaigns for brands including Stoli and Peugeot.

Immersion partnered with Teads for a study that looked at the effects of haptic technology integrated into the trailer of the latest Jason Bourne movie.  The study was conducted in Latin America where the majority of consumers own Android phones—haptic technology is not yet available for use on the iOS platform.

Every time a car would explode in the trailer, for example, the phone would vibrate. While vibration is intrusive, it fit into the context of the movie trailer and video, according to Eric Tourtel, SVP, Latin America, of Teads.

“Our findings were that people found this ad less annoying and intrusive than the same video without haptics,” Tourtel said.

Key findings from the study:

--Of those polled, 70% said the technology made the Bourne trailer more interesting.

--Of those polled, 72% said they would like to see the technology used again.

--Video ads with haptics resulted in an increase of 41% in purchase intent, a 38% increase in positive brand opinion, and an increase of 6.5% in overall video completion rates.

Overall, Teads found that beyond the interaction with the ad, video ads with haptics drove an increase in awareness and brand familiarity. In fact, of those who experienced haptic ads, 77% said the technology made them pay more attention to the ad.

The study tested the effectiveness of haptics in mobile ads online and the potential expanded reach for advertisers.

Teads plans to use haptics technology even more, but in a highly targeted way. “We have to pick and choose which creative we can use haptics in because the technology is intrusive. We are going to push it forward but cherry pick and offer guidelines to clients,” Tourtel explained. Besides the Latin American market, the U.K. market is interested in the technology.