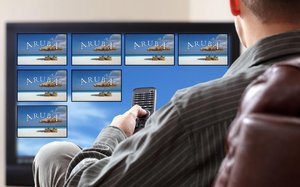 The Holy Grail of advertising has long been to reach the right person, with the right message at the right time. But an increasingly holier pursuit might be to reach them the right number of times. Especially on television.

At a time when brands, agencies and the media talk up the value of a consumer’s experience with advertising in an increasingly cluttered world, a number of “addressable” TV players claim they can finally do that with Madison Avenue’s apex medium, enabling brands to target and control their ad messages down to the household -- maybe even the user -- level.

At least that has been the promise, but an in-depth investigation of the state-of-the-art of addressable TV advertising systems by independent media agency U.S. International Media has found addressability -- especially the ability to control the frequency those households and individuals are exposed to -- to be lacking.

In a series of addressable test buys made for the Aruba Tourism Authority, USIM discovered they had little ability to control for actual frequency, yielding a wide, uneven range of commercial exposure to the households they were addressing on the two dominant addressable TV platforms: Invidi Technologies and Comcast’s Visible World.

Mitch Oscar, director of programmatic strategy at USIM, says the client was promised a target of 426,622 adults 25 to 64 years old with a household income of $100,000 and a propensity for Caribbean travel though Invidi, and 464,553 of that target from Visible World.

The addressable campaigns ran for four weeks and were guaranteed an average “frequency targeting” of 14 household exposures on Invidi’s platform and 16 on Visible World’s.

USIM’s Oscar discovered “there is no guarantee” in terms of the actual frequency with which the commercials were delivered to each addressable household, so he probed further, asking each provider to rune a “quintile” analysis, so he could visualize how the actual distribution fell.

The quintile analysis divided the campaign’s results into five equal segments each representing 20% of the households it ran in.

The Invidi analysis found a wide spectrum of actual frequency ranging from 38 ad exposures in the top quintile, 22 in the second, 15 in the third, nine in the fourth and just three in the bottom quintile.

Similarly, the Visible World campaign delivered 28 exposures in the top quintile, 13 in the second, seven in the third, four in the fourth and just two in the bottom quintile.

“They said some people didn’t watch TV during your campaign flight,” says Oscar. But he adds: “Am I wrong to think there is some kind of ‘within reason’ frequency delivery?”

Oscar presented his findings at one his so-called “Secret Society” meetings, at which various advanced TV providers, researchers, advertisers and agencies present and discuss the sector’s progress.

Oscar asserted that the results of the addressable TV tests -- especially for the two lower quintiles of both programmatic platforms -- were not in the spirit of what the industry should think of as addressability.

“Less than half my audience got virtually nothing,” he pointed out.

As imperfect as the current state of TV addressability is, Oscar says it ultimately comes down to price. Despite the sector’s claims of improved efficiency, Oscar asserts his investigation found it is “more expensive” than a conventional TV buy’s reach.

Many addressable TV providers say they do “frequency management,” but do not “guarantee” their results.

“Household frequency guarantees are not promised in the industry, and at Dish this is due to a simple reason – our addressable ads never play to an empty house,” a Dish Media Sales spokeswoman tells MediaPost Weekend, adding: “Impressions are delivered only when an active viewer’s TV is turned on.”

A DirecTV spokeswoman said: “We do frequency capping and guarantee audience impressions. We can cap the number of times households’ see a spot and only charge based on the number of impressions against target household.”

TV frequency issues can occur, says Andrew Freeman, supervisor at Starcom MediaVest Group, when “an advertiser decides to pump in money in order to reach that lowest viewing quintile at the expense of the highest quintile receiving an overload of impressions.”

Freeman said, “if our goal is to reach an average of 14 views per household, then maybe limit each house to 20 views. What might end up happening is the vendor does not deliver 100% of my dollars, but I would rather avoid anyone receiving 38 (too many) ads than have all of my dollars spent just for the sake of spending the dollars.”

For many, it's all part of the evolution of where addressable TV deals are going.

“The ability to evolve beyond caps into actual delivery guarantees and optimization will increase in direct proportion to TV's migration to more IP-centric delivery,” explains Tim Hanlon, founder-CEO of The Vertere Group.

“You could argue that early ad work in things like authenticated streaming, OTT video and connected/smart TV environments are starting to get us there,” he added.

But right now addressable deals, for some, might be kind of fuzzy -- when it comes key specifics.
Next story loading