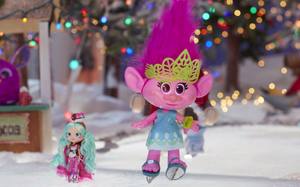 Well aware that elves are doing more toy-shopping online, Toys R Us is stepping up its in-store allure this holiday season, with promotions that include professional Santa portraits and hands-on toy-testing sites.

The Wayne, New Jersey-based retailer says it’s all part of its “Store full of Awesome” holiday positioning. The portraits, which it says will save parents hours of waiting for old-fashioned mall Santas, allows people to email participating stores for an appointment time, then scoot in and out of a fast photo session. (Portrait packages start at $30.)

Toy-testing promotions, held on Nov. 5, allowed kids to watch live demos of some of the toys the chain thinks will be among the season’s biggest winners, including Nerf blasters, Brightlings, the Think & Learn Code-a-Pillar and Paw Patrol Zoomer Marshall. It combined events with giveaways, raffles, and “make and take” activities.

Seasonal ads -- via BBDO and voiced by some of the season’s hottest toys, including Trolls, FurReal Friends and Furby -- highlight coupon deals, and reinforce the “Awesome” messaging.

In its most recent quarterly results, the company says comparable-store sales rose 0.5%, while its U.S. e-commerce sales surged 15%. While acknowledging that its turnaround plans have been made more difficult by a “challenging” retail environment, “as we enter the critical holiday season, we are focused on creating a world-class shopping experience and ensuring that we consistently deliver the products our customers want,” says CEO Dave Brandon, regardless of when and how they want to shop with us.”

Industrywide, however, toy sales have been much stronger in recent months -- up 6% in the January-to-September period, according to a new report from the NPD Group -- and the trend toward experiential purchasing programs like Toys R Us is partially responsible. And NPD expects that strength to carry through the holiday season. Higher price points are also helping to drive sales gains, it says, as are an increase on collectibles and the trend toward healthier living. It’s forecasting a 6.5% gain in toy sales for the full year.