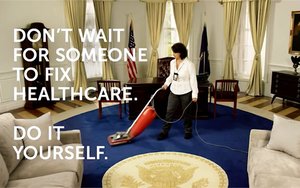 MDsave is introducing its first regional advertising campaign that coincides with the Affordable Care Act's open enrollment period that kicked off November 1.

Developed with agency Cutwater, the "Feels Better Already" campaign is straight-forward and suggests people have the power to transform their own healthcare. The insurance facilitator's point of differentiation, it says, is to try to simplify the healthcare billing process for patients and providers through negotiated rates, bundled pricing, and up-front payments.

The 30-second "Vacuum"  TV spot features a woman vacuuming what looks like an empty “Oval Office.” The concept suggests that politicians are avoiding fixing healthcare which leaves Americans in a waiting game. The spot ends with the call to action - “Don’t Wait For Someone To Fix Healthcare, Do It Yourself.”

In addition to the TV spot, the effort includes social, radio, and out-of-home executions. The media will be deployed across regional markets in Nashville, where MDsave is headquartered.

MDsave and Cutwater have been working since the start of their partnership earlier this year to create a brand identity and platform that aligns with its intended values. The startup claims it is the world's "first online healthcare marketplace."

“Having a strong, clear identity is essential in ensuring the successful growth and consumer loyalty for any brand,” stated Chuck McBride, founder and chief creative officer, Cutwater. “This brand platform and campaign doesn’t offer an empty promise to improve a problem, but a shift in mindset that can lead to an effective solution."

Launched in 2012, MDsave operates in 23 states and 96 markets and counts former Sen. Bill Frist as one its board of directors. The company raised $12 million during its first venture round.