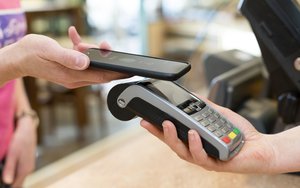 It’s getting much easier for consumers to pay for things with numerous forms of mobile payments but they still aren’t doing it in mass.

This year, 38 million Americans will have used their mobile phones to pay at the point of sale at least once in the last six months, according to a new study by eMarketer.

While a pretty big number, it’s still only 19%of smartphone users. By 2020, that figure is projected to grow to 33%, so still not a majority seen down the road.

Mobile payments also vary a bit based on the consumer’s age.  Most of the usage is by people 25 to 44 years old. Here’s the breakdown by age of who uses mobile payments:

That 31% of those 25 to 34 years old using mobile payments translates to 12 million people. By 2020, that group is expected to exceed 21 million, though its share will decrease to 28% as older consumers start using their phones at the point of sale, according to eMarketer.

Issues holding mobile payments back include security concerns and lack of widespread merchant acceptance. Perhaps one of the biggest is the actual value proposition: it still is very easy to pay with cash or credit card, though the introduction of chip cards in the U.S. has made the process a bit slower as shoppers wait for their chip-enabled card to be approved while inside the payment terminal.

Even though the majority of consumers don’t use mobile payments, the amount of money moving through the system from those who do is significant. For example, mobile payments at point of sale will grow 183% to $28 billion this year and that figure will more than double next year to $62 billion on the way to $314 billion by 2020.

More than 90% of retail sales, totaling more than $4 trillion, will occur in traditional, physical stores this year, where most of point of sale mobile payments occur.

In terms of which mobile payments are used by consumers, it’s pretty much a tossup when viewed by the number of merchants who accept them, according to earlier study.

Mobile wallets from Apple and Google both can be used at 3 million merchants while Samsung Pay is accepted at 85% of terminals, according to the report.

That study is based on survey of a random sample panel of more than 10,000 consumers who were representative of the U.S. population conducted by Javelin Strategy and Research.

Each month, different numbers of in-store shoppers use their phones depending on what they use. More (8%) use Apple, while 5% use Android and 3% Samsung, according to the study. This translates to 19 million people using Apple devices, 12 million Android and another 8 million using Samsung’s payment platform.

For overall smartphone owners using mobile wallets, growth has about doubled in two years. For example, there were 11% using them in 2013 compared to 21% in 2015.

After all the marketing to convince consumers to use one mobile payment or another, the glacier-speed consumer acceptance continues.