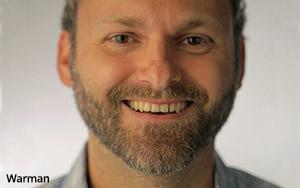 Warman has been named CCO at Empower, while Jones will serve as consultant to the agency.

Empower CEO Jim Price says the agency’s goal is to be able to create “true omnichannel experiences.” The agency, he said, is “enhancing our Creative offering to be a strategic function across everything we do.”

The firm has honed its data and technology expertise to “allow us to precisely reach an audience at the right place, right time and in the right context,” added Price. “It’s equally important to deliver the right message. When all of these components work together we’re able to create true omnichannel experiences.”

Warman started his career in New York developing documentary films at CBS News and later moved to Cincinnati. He’s known for his brand storytelling work for the Muhammad Ali Center, Under Armour, the LIVESTRONG Foundation and the youth-led movement, Stand, for The Ohio Tobacco Prevention Foundation.

Warman and Jones founded PROCLAMATION four years ago. They positioned the shop as a “brand movement agency” whose purpose was to create messaging and content for brands. The agency has worked for clients such as French's Mustard, the NFL, Cincinnati Children's and Procter & Gamble.