Comparing The '70s To Today After Stumbling On 'Sonny & Cher' 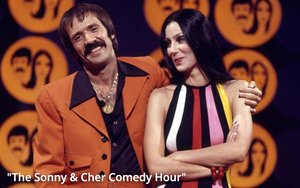 What were we thinking?

This question occurred to me recently when I came across an old episode of “The Sonny & Cher Comedy Hour” on one of those TV oldies channels.

This particular channel was the one called Get TV. It’s one of those digital subchannel networks -- known variously as “diginets” or “multicast networks” -- that you will find on your cable lineup if you look hard enough. Launched in 2013, Get TV is owned by Sony Pictures Television.

The scene I encountered on this particular episode of “Sonny & Cher” from the mid-’70s was one of those prolonged segments in which Sonny and Cher bantered with each other while one of them held their young daughter, Chastity. Part of the banter involved Chastity, who was basically being used as a prop for eliciting oohs and ahs from the studio audience over her cuteness.

She would occasionally say or do the darndest things. For example, in the segment I watched, Cher began to tell a story about how Chastity -- who was quite small at the time -- had said recently that she wanted to be a boy. (I am not making this up -- it really happened.) But Chastity, who was being held by Cher at the time, was embarrassed by this story and hid her face in her mother’s chest. Aww, said the studio audience.

The revelation here that Chastity was thinking of gender reassignment even at a very young age (without really understanding it in that way, of course) is really not the point, although it certainly was interesting.

The point is that the entire segment -- and other parts of the show too -- were virtually unwatchable. From the clothing and phony banter to the cheesy backdrops, there was nothing that you might classify as salvageable -- i.e., that would appeal to a modern-day viewer.

And I wondered: Why on earth was this show -- which ran in one form or another for most of the 1970s -- so popular? The likely answer could be that basically, we had little choice. While plenty of shows came and went in the era when there were only three TV networks, many stuck around for a long time, despite qualities that seem off-putting in retrospect.

In fairness, enjoying “The Sonny & Cher Comedy Hour” back when it first aired is no crime (nor is enjoying it now, come to think of it, if that’s what your taste dictates). But watching part of that show recently, and on the same evening watching another show on Get TV that was long on fakery and obvious insincerity -- a “Friars’ Roast” of Don Rickles from 1970 -- I couldn’t help but compare that era with the one we’re in now.

Today, we have a plethora of choices, spawned from the fragmentation of the system by which content gets delivered to us. This has created a hyper-competitive atmosphere where the making of TV shows is concerned. The result is a general raising of the bar in quality (not to mention the sheer amount of TV shows). In the ’70s, we were more or less “forced” to be satisfied with whatever the tripartite distribution system we had in place would drum up for us.

There were some very well-made shows too -- “The Carol Burnett Show,” various shows from MTM and Norman Lear, “Columbo,” to name a few. But back then (and here’s the point), the real action was at the movies.

Today, the ’70s are revered as a golden age of movies. Everybody old enough to have experienced it has their personal favorites. Mine include “Dillinger,” “Days of Heaven,” “Animal House,” “The Omen,” “The Exorcist,” “Rocky,” “Apocalypse Now” and the list goes on and on.

The situation seems to have been turned on its head today. Nowadays, television production is generating more heat than moviemaking.

Most movies today are made for kids (all those animated features) or teens (a never-ending supply of superhero movies). TV is the place where grownups go now for their entertainment, particularly because the technology of home entertainment -- whether a big-screen TV mounted on a wall or a personal device such as a laptop or tablet -- offer an experience that’s more attractive for many than traveling to a movie theater.

Moviemakers too have gravitated to television, including several who made their bones in the 1970s such as Martin Scorsese and Woody Allen.

As for “The Sonny & Cher Comedy Hour,” shows like that are probably better consumed today in small bites. Today’s technology even offers a way to do that. It’s called YouTube.

tv
3 comments about "Comparing The '70s To Today After Stumbling On 'Sonny & Cher'".
Check to receive email when comments are posted.
Read more comments >
Next story loading