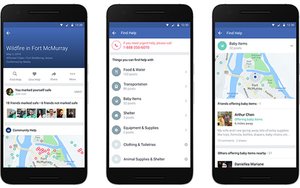 From relentless criticism about its role in the presidential election to additional  ad-metric inaccuracies, Facebook is in need of some good news.

Enter Community Help -- a new effort unveiled at Facebook’s first “Social Good” forum, on Thursday. Expected to launch early next year, the forthcoming feature should make it easier for users to ask for -- and offer -- help following disasters.

The social giant is thinking in terms of shelter, food and supplies. But what people ask for -- and what they choose to give -- is ultimately up to them

“We’re inspired by how much good comes from connecting on Facebook but we know we can do more,” Naomi Gleit, VP of social good at Facebook, notes in a new blog post.

Going forward, Facebook will also let its community decide when it should turn on Safety Check -- an existing feature that lets users tell loved ones they are safe during and after major disasters.

“We believe people closest to a disaster should play a bigger role in deciding when Safety Check is most helpful,” according to Gleit. When a lot of people post about an incident from the affected area, they may be asked if they’re safe … Once marked safe, a person can then invite friends to do the same.”

Facebook is also making it easier for users to make charitable donations through its Fundraisers service. It is expanding its network to include 750,000 nonprofit partners.

The company's engineers were inspired to develop Safety Check following the 2011 earthquake and tsunami in Japan.
activism, facebook, social media
Next story loading