Old Navy Asks Schumer, Guerrero To Put Up Their Dukes 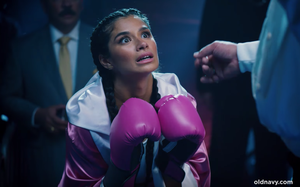 To tempt more shoppers into its stores before the beginning of the holiday season, Old Navy is giving away $100,000 each day. And to promote the contest, it has shoved comedian Amy Schumer into the boxing ring, prancing in pink trunks and pink gloves.

That’s just until she realizes she’s a) facing the beatdown of her life and b) might find it easier to win money shopping at Old Navy. In addition to the Schumer spot, the Gap-owned retailer has made an equally adorable Spanish-language version, starring Diane (Orange is the New Black) Guerrero. Chandelier Creative is the ad agency.

It’s all part of the chain’s “Instant Happy” pre-Black Friday effort. In addition to handing over $100,000 to one person each day in the week ahead, it’s handing out scratch tickets for prizes like movie tickets from Fandango, chips and guacamole from Chipotle, $25 coupons for Tiny Prints, and free shipping for items purchased on its Web sites.

Old Navy continues to be the only bright spot at Gap Inc., which just released its numbers for the third quarter of its fiscal year. While few observers expected much good news — the San Francisco-based retailer has been in a sales swoon for the last few years — they were disappointed by the company’s announcement that the fourth quarter would be worse too, due to increased marketing spending and slowing November sales. Citing “challenging traffic trends,” industry code for “nobody wants to shop here,” Gap says same-store sales fell 8% at the Gap and 8% at Banana Republic. Old Navy bucked the trend, with sales gaining 3%.

“If this was a one-off event, the numbers might be excusable – but it isn’t,” writes Neil Saunders, CEO of Conlumino, retail consultancy, in his analysis of Gap’s earnings. “This is the latest in a long line of terrible results which, tellingly, have resulted in the Gap division’s U.S. revenue declining by 21% over the past three years,” he says. “This is a company in a tail-spin with no real clue how to pull out of it.”