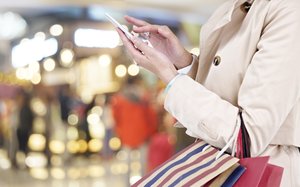 The big numbers for mobile commerce holiday shopping come out both before and after the holidays.

Every year for the last several years, the mobile commerce activity numbers have been up and this year promises more of the same.

In one of the latest holiday shopping forecasts, mobile shopping has passed shopping on desktops and tablets for the first time.

That report, based on a survey of 4,000 adult shoppers in the U.S., Canada and U.K. by Salesforce, also projects that holiday spending will increase 10% this year.

More than half (51%) of all digital commerce traffic is expected to come from mobile phones compared to 40% from tablets. Tablets have been on the downswing for some time now in terms of overall mobile activity.

Interestingly, most (77%) shoppers plan to avoid physical stores during the holidays, because of crowds (58%), traffic (33%) and the convenience of online shopping (29%).

A significant part of that purchasing may be less for specific items than for gift cards.

The majority (81%) of U.S. adults say that up to half of the gifts they plan to purchase this holiday season could be gift cards, according to a survey of 2,300 consumers conducted by Blackhawk Network.

Somewhat counter to numerous other studies, Blackhawk found that more than half of shoppers say picking gifts that are a good fit for their recipients is a top priority, even more than price and convenience. Mobile commerce studies routinely show that getting a deal is a top priority for mobile shoppers.

Overall holiday sales also are projected to be pretty hefty this time around, with total retail sales increasing 3% over last year to $885 billion, according to eMarketer.

The next benchmark of mobile commerce will be right after the holidays. That’s when the true mobile tally gets done and we have no doubt it will yet again significantly top the numbers from last year.