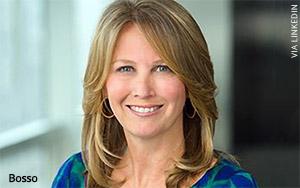 Bosso had served as publisher of the magazine since last March.

The magazine is creating a new role — publishing director — to lead the business side of the brand. Hiring is underway.

Marc Siegel is also out as global head of audio sales, according a report from the New York Post’s "Media Ink."

In the editorial shakeup announced earlier this month, 30 newsroom staffers were let go as Bloomberg made public its plans to relaunch Businessweek in the second quarter of 2017. The magazine’s top editor, Ellen Pollock, is leaving and will be replaced by Washington bureau chief Megan Murphy.

Other media companies have cut the publisher role this year.

Earlier this month, New York magazine’s publisher, Larry Burstein, announced he would step down after serving 13 years in the role. His replacement will instead be called Chief Revenue Officer.

In July, Time Inc. said the days of publishers overseeing individual magazine titles were over, eliminating the role from its corporate arrangement and consolidating the organization of its sales and marketing teams.

Time Inc. hopes to package multiple, powerful brands together for big advertisers and rely on well-known titles to draw in more ad dollars.

Mark Ellis, Time Inc. president and COO for sales and marketing, explained: “We were looking at the title of publisher, which everyone thought was fairly antiquated, because it denoted a print-centric company.  We’re moving to being a digital-first company and we wanted the titles and sales structure to reflect that.”