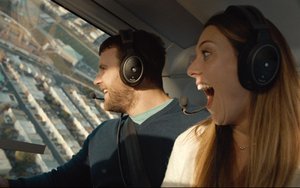 Groupon is introducing its first-ever holiday campaign to encourage shoppers to buy gifts and experiences available only through its platform. This multimillion-dollar campaign will run throughout the remainder of the holidays.

Developed with agency O'Keefe Reinhard & Paul (OKRP), the "Gift the Experience" campaign includes two TV spots that separately showcase the experiences, including sky-diving and massages, and the gifts, such as drones and GoPros, cookware from Rachael Ray and Vitamix blenders and apparel and sports equipment ranging from coats to skateboards. They end with the tagline: “With Groupon deals this year, I’m going to gift experience.”

“We wanted to build from the tone we set when we launched the campaign earlier this year," says Matt Reinhard, chief creative officer, OKRP. "Groupon Holiday gives us an opportunity to juxtapose our high-def, in-the-moment lifestyle footage against a humorous, lyrical take on the 19th century classic opera."

The ads will run in 15 and 30-second formats on networks and cable outlets including ABC, Fox, NBC, Bravo, Comedy Central, E!, Food Network, HGTV, Lifetime, TLC and USA. Media for the campaign was placed by Blackwood Seven.

The ads are an extension of the ongoing "Own the Experience" campaign that  launched over the summer. The platform's advertising budget was $88 million during Q3 2016, up an additional $26 million year-over-year, according to its most recent financial results. Groupon currently has more than 29 million total active customers in North America and more than 50 million active customers globally.