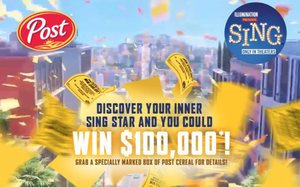 The sweeps' grand prize--a check for $100,000 in cash--is the same amount as the prize the characters are vying for in the movie. The sweeps' first prize is a check for $5,000. Instant-win prizes include movie tickets, headphones, Bluetooth speakers and video cameras.

To enter, consumers obtain codes from inside specially marked boxes of Honey Bunches of Oats, Grape-Nuts, Golden Crisps or Honeycomb and enter them in the online entry page for the sweeps/game. Each entry (each code good for only one entry) brings a chance to win the grand prize, as well as a chance to win an instant prize. Consumers may enter up to three different codes per day, through March 31.

Post is running a heavy television schedule for a 15-second spot promoting the sweepstakes.

The spot, also featured on YouTube (below), uses elements of the oft-aired creative from the Honey Bunches of Oats “This Is Everything” commercial, altered to feature the sweeps and clips of the animated characters from “Sing,” which is set to open on December 21.

The movie, produced by Illumination Entertainment, stars the voices of Matthew McConaughey, Reese Witherspoon, Seth MacFarlane, and Scarlett Johansson, and features 85 “classic” songs, plus an original song by Stevie Wonder and Ariana Grande.