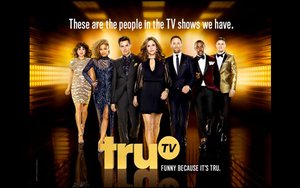 Turner’s TruTV is looking to be perfectly frank with its TV viewers when it comes to its on-air TV promos.

In a new campaign for its push into comedy programming, an on-air graphic says over a picture of its prime-time talent: “These are the people in the TV shows we have.”

In one TV promo, while its stars are dancing onstage, the TruTV logo falls on one member, seemingly knocking out a performer -- or worse. The spot ends with the graphic: “In Loving Memory. Andrew Orvedahl. 1976-2016.”

In another, a wind machine -- typical in many TV productions/
commercials -- gets a little too blustery for the star of a new series, “I’m Sorry.”

WorkInProgress is the ad agency for the campaign.

Among the new comedy TruTV shows are “Impractical Jokers,” “Adam Ruins Everything,” “Those Who Can’t” and “Jon Glaser Loves Gear.”

The network pulled in $410.2 million in national TV advertising year-over-year ending in November, according to iSpot.tv. Over the same period the year before, TruTV pulled in $346.5 million.