The Bumpy Road To Mobile Payments 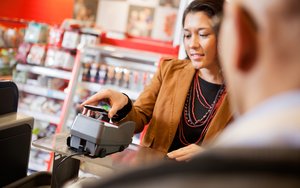 At first, a long lag was created when Apple held off adopting near field communication technology until its later models, when it finally introduced Apple Pay.

Then the market had to wait for retailers to purchase and install checkout terminals that could handle mobile payments, both from Apple and Android phones.

The eventual implementation of EMV terminals to handle new credit card with embedded chips in the U.S. helped that along, since those new terminals generally also are capable of accepting mobile payments.

The long-awaited mega-mobile payments venture, promising its own mobile payment scheme for major retail members including Walmart, Target, Best Buy and pretty much every other major retail brand, finally gave up, shutting down back in May.

Retailers then started to go-it-alone, incorporating payment capabilities inside their own apps.

This year, 38 million Americans will have used their mobile phones to pay at the point of sale at least once, according to eMarketer. While a big number, it’s far from mass adoption.

Now a new study by Capital One suggests that mobile wallet adoption may be gaining a little speed.

About a quarter (24%) of consumers are now using mobile wallets in some capacity, based on the Capital One wallet survey of 1,800 consumers.

But it’s not like this has become a totally ingrained behavior, since most (63%) have been using mobile wallets for less than a year.

On the plus side, nearly half (49%) of mobile wallet users plan to make at least one gift purchase on mobile during the holiday shopping season. This despite that more than half (54%) of those mobile wallet consumers are concerned about credit card fraud.

They should have reason to be concerned: more than 43% of them have at one point or another had a charge come through that surprised them or was for the wrong amount. This is hardly a good thing to push mobile payments along.

Mobile payments aren’t restricted to retail stores, though that is the most frequently tapped location, based on the survey. Here’s where consumers use mobile payments:

It’s not only consumer attitudes or behaviors holding mobile payments back. More than two thirds (70%) of those who use mobile wallets said they would use them more if more merchants were equipped to let them pay that way.

And just as mobile payments seem to get a slight bit of steam, Amazon comes along with a new way to get in and out of a store without needing any point-of-sale terminal to interact with on the way out.

The new Amazon Go being launched involves a system that detects when items are taken off a shelf by a shopper with the person’s Amazon account being charged as soon as they leave the store.

In that case, mobile payment essentially vanishes, since the transaction is all handled behind the scenes, just like in Amazon’s one-touch purchasing.

So much for mobile payments evolving from point A to B to C.