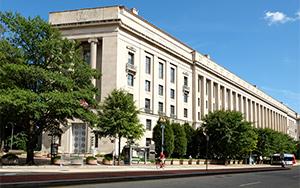 For years, the AICE — the trade group for independent post-production houses — has been loudly complaining about the ad industry practice of “check bids,” and other unfair practices utilized by Adland in the course of producing commercials for their clients. Now it appears that the U.S. Department of Justice is looking into the matter.

The Wall Street Journal reported today that the Justice Department has begun a probe looking into so-called check bids and related activity. A check bid is a bid for commercial production work that an independent production house submits — often under pressure from an advertiser’s ad agency that is also in the commercial production business.

The agency requests the "competing" bid, knowing in advance that it will submit a lower price and end up with the production contract. But the client will be under the impression that there was a fair and transparent competitive bidding process, although in many cases the independent shop is pressured to inflate its rates so that the agency can easily submit a lower and winning bid. The practice is a form of bid rigging which violates antitrust laws.

The Journal reported that Rebecca Meiklejohn, a government antitrust attorney based in New York, has been interviewing ad industry executives about the issue over the past few months, according to its sources, which the publication did not identify but described as “people familiar with the matter.” The DOJ did not immediately respond to a query seeking confirmation of the probe.

The major ad-holding companies have built up their commercial production efforts over the last decade as a way to generate additional revenue from clients. Two years ago the AICE went public with complaints about check bids, urging advertisers to strongly consider the issue and whether they were getting the most for their money with a commercial production contract signed with one of their agencies.

The Justice probe follows a major investigation earlier this year looking at agency media-buying practices that was commissioned by the Association of National Advertisers. That investigation, focused primarily on the U.S. and which was conducted by K2 Intelligence, concluded that agencies frequently engaged in practices that clients were unaware of, such as demanding and receiving rebates from media companies as a condition for doing business with them.

Sources confirmed, as the Journal reported, that an early K2 draft report addressed the check bid production controversy. However that portion of the report was cut, as the ANA believed it diverted attention from the main issues of the inquiry. However, the ANA has launched its own task force looking into the commercial production business and specifically at alleged wrongdoing such as check bid abuses.

But K2 did find evidence that agencies were pressuring independent production companies to submit so-called “dummy bids” so that they could provide a paper trail to clients that a competitive bidding process was conducted. According to the Journal, Meiklejohn has subpoenaed K2 as part of the investigation.

ANA President Bob Liodice issued this statement: “We find the information about the Justice Department’s investigation very disturbing. It’s especially interesting to note that this revelation comes only six months after we released the results of our own investigation with K2 Intelligence into allegations of rebates, non-transparency, and related issues in the U.S. media ecosystem.   This new development raises even more concerns about trust between advertisers and their agencies and we plan to follow it closely as it develops.”

Agency sources note that like the ANA transparency probe, the DOJ has yet to publicly identify any specific agencies that may have violated the law. Asked to comment on the Journal report, holding companies Interpublic, Omnicom and WPP declined to do so.

The 4As issued this comment: "It goes without saying that we require our member agencies and their staffs to follow the letter of the law."

AICE Executive Director Rachelle Madden commented: “We've been talking about in-house and its inherent conflicts of interest with both our members and with the ANA for some time, and we continue to encourage advertisers to scrutinize carefully how their post production dollars are being spent."

“We believe many marketers may be unaware that their agency or agencies are under a financially-driven holding company directive to keep as much of their work in-house as possible, thereby limiting choice and cutting them off from potentially better deals or better creative solutions. They may also not be aware of what they’re getting when their work is completed at agency in-house facilities, or whether the use of them represents the best option to ensure the best final product and the best talent for their money.

“Also, the bidding process is not always done in the open, with clients fully informed as to the ownership status of the post entities submitting the bids. (Some agencies use generic and unrelated names to brand their in-house facilities, which can mask the fact that they’re wholly owned by and housed within the agency.) We believe in-house facilities should clearly identify themselves as such when bids are submitted to help ensure that the bidding process is done in a fair and upfront manner.”