Ego Power Moves Out Of The Lab For New Campaign 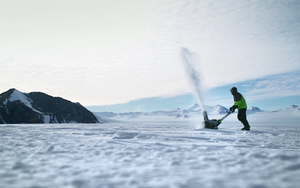 Battery-powered outdoor equipment manufacturer Ego Power+ is taking its snowblowers out of the lab and putting them into the most extreme real-world conditions to show off their capabilities.

The commercial describes the frozen continent as “the coldest, windiest, most hostile environment on Earth.” In the middle of nowhere, and away from anything that even remotely looks like civilization, a lone person turns on the Ego Power+ snowblower with the simple push of a button and begins blasting snow into the air. “This is power, beyond belief,” a voiceover concludes, enunciating the brand’s tagline.

“Convincing consumers that Ego has the same power as a gas-powered snowblower is not easy,” Joe Turoff, vice president of sales and marketing at Chervon, Ego’s parent company, tells Marketing Daily. “What I loved about [this] idea was that it could be an incredible way to show consumers that the Ego snowblower — no matter where you live — is right for you.”

Ego's previous efforts for its lawnmowers and leaf blowers have shown the products being used in a lab environment and faring competitively or better than their gas-powered counterparts. Despite moving the new campaign outdoors, it maintains the previous effort’s spirit, Warren says.

“The Antarctic is part of a lab environment; it’s reliably desolate,” he says. “That was the most dramatic, compelling place imaginable. If [the snowblower] can start there, it can start in Minnesota.”

In addition to the commercial footage, which will be used in digital, television and social channels, the team shot footage for potential use by exclusive retail partner The Home Depot, for use on social channels as well, Turoff says.