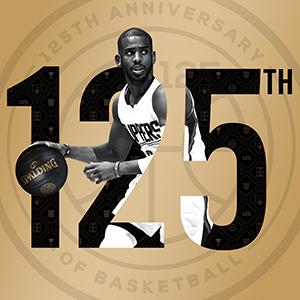 According to official documents, the first game of basketball was played on Dec. 21, 1891 in Springfield, Massachusetts under the auspices of Dr. James Naismith, the man who brought hoops to life.

Spalding, the official basketball of the NBA and a “partner of the sport for more than a century,” says the effort is intended to “honor the game that has challenged, inspired and awakened the competitive spirit in all of us.”

The campaign will focus on a digital “call-to-action” effort directing basketball fans to share posts and stories on how they will honor the game and its anniversary.

It includes Facebook, Instagram and Twitter with the hashtags #TrueBelievers and #125HoopYears, as well as partnerships with the NBA, Slam Magazine, ABC digital networks and “other strategic partners.”

Paul and other Spalding endorsers such as DeMar DeRozan (Toronto Raptors) and Damian Lillard (Portland Trail Blazers) will appear in digital and print ads and in-store signage.

Spalding, a division of Russell Brands, has produced a limited-edition 125 commemorative basketballs, which will be part of the visual aspects of the campaign during activations at various games and hoops destinations nationwide. After the campaign, Spalding said the balls will be given to “key members of the basketball community, influencers and partners of the Spalding brand.”

In an open letter, “Thank You, Basketball,” Spalding writes, “For 125 years you’ve been a force that has challenged, inspired and awakened the competitor in all of us. From the blacktop to the hardwood, you are something different to everyone. A classroom. A battlefield. A sanctuary. Thank you for being a vivid reminder of what hard work and determination can produce.”

“We are extremely proud of our storied history with the game of basketball,” Kenyatta Bynoe, VP of global brand marketing and partnerships for Spalding, said in a statement. “From developing the first basketball for official use to being the official basketball of the NBA for 33 years, basketball is core to what we do.”