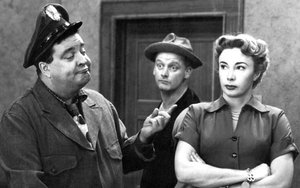 The TV Blog is not a big believer in sacred cows, but an exception will now be made for “The Honeymooners.”

This consideration comes on the heels of the news that broke Thursday that CBS has ordered a script for a new version of this show. In TV terms, this is like ordering a rewrite of the Torah or the Dead Sea Scrolls.

This story on the Hollywood Reporter Web site has the details, which you can read for yourself.

But here's one detail sure to raise eyebrows: The very scenario of “The Honeymooners” is due to be altered in a significant way. The THR story says one of the couples -- either the Kramdens or the Nortons -- will have gotten divorced four years earlier, and then got remarried.

This could mean either that they remarry each other -- which would preserve the show's four-character formula -- or they each marry someone else, turning the show into a six-character scenario.

The story doesn't exactly make this clear. Here is what it says: “The new take centers on two couples,” says the THR story, “best friends and neighbors like the original, who contend with a new dynamic when one couple remarries after divorcing four years earlier.”

Whether the new “Honeymooners” intends to have four or six core characters, this divorce backstory would seem to run counter to the point of the show in the first place.

The original was always about these two couples who are long married (15 years for the Kramdens) but are still “honeymooners,” in a way.

Yes, they encounter strife in their marriages, but in the end they find that they still love each other much like they did when they were first married. A divorce? On “The Honeymooners”? Alas, is nothing sacred?

Sure, it’s only television -- a medium that has never seemed overly concerned about the integrity of its heritage. And it's not as if the making of this new “Honeymooners” will somehow subsume the original.

“The Honeymooners” -- the real one from 1955-56 whose episodes are known as “the classic 39” -- can still be seen everywhere. In New York, they’re still seen on WPIX/Ch. 11. They’re seen on MeTV and, as I discovered Friday morning, entire episodes of the show are readily available on YouTube.

In fact, the ubiquity of the original -- along with the apparent affection that exists for it -- raises the question: Why remake “The Honeymooners” at all? To see how some present-day actors might do in the roles of Ralph and Alice Kramden, and Ed and Trixie Norton?

It should be noted here that a “Honeymooners” movie was made in 2005 starring Cedric the Entertainer as Ralph and Mike Epps as Ed Norton. The movie came and went and was soon forgotten.

That stands in stark contrast to the original show, which has stuck around for 60 years. Maybe the lesson of the movie was that no one really wants to see anyone standing in for Jackie Gleason or Art Carney in the roles of Ralph and Ed.

It is not a unique opinion -- but rather one that is widely held -- that their performances are among the finest and most timeless ever delivered on television.

That is especially true of Gleason, who in his prime was one of the most electrifying performers of his era. (Book recommendation: If you can find the 1992 biography titled “The Great One: The Life and Legend of Jackie Gleason” by the late William A. Henry III, then buy it. It is one of the best show business biographies ever written.)

One reason the idea of a “reboot” for a show like “The Honeymooners” is so unsettling is because of what the word “reboot” would seem to imply. One of the joys of the old “Honeymooners” is how spare the whole thing is. About 90 percent of the show takes places in the homely front room of the Kramden’s Brooklyn apartment, consisting of a dresser, table and chairs, an icebox, sink, window and grimy walls.

So what would a reboot do? Redecorate the Kramden’s apartment? Outfit it with modern-day gadgets? Instead of Alice pining for a telephone to be installed in the apartment, will we have an episode in which she begs Ralph for a new smartphone?

To borrow a phrase from the robot in “Lost in Space,” the whole thing does not compute.