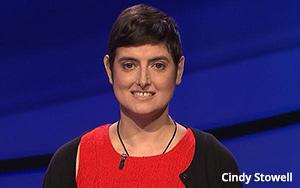 A “Jeopardy” contestant’s death before she got a chance to see herself on the quiz show is making for a very unusual viewing experience.

The contestant, the late Cindy Stowell of Austin, Texas, has been the reigning champion on “Jeopardy” since last Tuesday (December 13). But she died December 5 following a battle with colon cancer. Stowell, described as a “science content developer,” was 41.

If you had not already read the stories about her that have been circulating for about a week now, and if you are not particularly observant when it comes to the visible evidence of a person’s illness, you might not have realized while watching “Jeopardy” for the better part of the past week that Stowell was already seriously ill. She started taping these shows back on August 31, according to The New York Times.. At the time, she already had Stage 4 cancer.

On the show, her voice is raspy and high-pitched at times. If you were armed with the knowledge that she was sick when she appeared on the show, then it has been possible to discern that this person was ill.

I have watched most of the four episodes in which she has appeared so far (through last Friday) and I have seen or heard no mention of her illness either on-screen or from host Alex Trebek. Nor has it been reported how long she will last as champion on the show. She will still be on today (Monday, December 19), defending her championship.

Her passing is noted prominently on Jeopardy.com, however. While not revealing how long she remained champion, the quiz show’s Web site tells the poignant story about how Stowell came to qualify for the show, and how the show adjusted some of its procedures in order to get her on the show faster than the usual lead time.

According to the Web site account, she knew she was dying, and was upfront about it in her communications with “Jeopardy” staff members. Last summer, after passing an initial tryout, she was invited to the next round, which was to be an in-person audition in Oklahoma City, the “Jeopardy” Web site says.

She then sent a message to Maggie Speak, contestant producer for “Jeopardy.” “Do you have any idea how long it typically takes between an in-person interview and the taping date?” Stowell asked.

“I ask because I just found out that I don’t have much longer to live. The doctor’s best guess is about six months. If there is the chance that I’d be able to still tape episodes of ‘Jeopardy’ if I were selected, I’d like to do that and donate any winnings … to charities involved in cancer research. If it is unlikely that the turnaround time would be that quick, then I’d like to give up my tryout spot to someone else.”

It’s really an extraordinary story, not least because she has now won for four consecutive days, which is a great run for any “Jeopardy” contestant and quite an achievement for someone who was likely not feeling well (something she concealed admirably throughout the four shows she was on last week).

Indeed, the “Jeopardy” Web site reveals that Stowell’s illness was known only to Trebek and the show’s producers. Her fellow contestants were not made aware of her condition.

“When Cindy Stowell taped her appearance on 'Jeopardy,' she had Stage 4 cancer,” says a statement from Trebek on the show Web site. “Competing on ‘Jeopardy’ was a lifelong dream for Cindy, and we’re glad she was able to do so. Sadly, Cindy died on December 5. Our condolences and best wishes to her family and friends.”

Hats off to “Jeopardy” and everyone involved with this show. They are class acts -- which is part of the reason the current incarnation of this show has endured for 32 seasons.