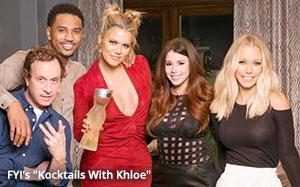 In past years, my annual assessment of the TV reviews posted here during the year gone by usually yields this surprising result: Positive reviews far outpaced the negative ones.

Why “surprising”? Because given the way so many TV shows come and go these days, it surprises me at the end of a given year when I discover that I reviewed more of them favorably than otherwise. While the year is underway, it often feels as if the opposite is true.

In 2016, however, that is exactly what happened. The other day, I combed through the year's reviews and made lists of positive and negative reviews. Lo and behold, the list of pans was approximately four times longer than the picks.

I hardly know where to begin. Out of all of the shows that were reviewed negatively here, it is not entirely possible to declare any one of them as “the year’s worst show.” But “Kocktails With Khloe” (pictured) comes pretty close.

This show on the cable network known as FYI had Khloe Kardashian playing “hostess” to “celebrity friends” (none of whom you’ve ever heard of), who would come to her home (which was actually a set) for cocktails and hors d’oeuvres. Unfortunately, this made for some of the most excruciating parties ever held.

In the episode I reviewed last February, the cocktail conversation included such subjects as “sharting,” odiferous genitalia and -- sorry to be blunt here -- kicking men in the nuts. FYI sensibly cancelled this thing.

But if you’re thinking TV couldn't go any lower than “Kocktails With Khloe,” then you probably missed the debut of “The Real Housewives of Dallas” last April on Bravo.

Basically, this show was like a bald-faced celebration of alcoholism and the antisocial behavior that results from it. Bravo would likely disagree, but look at the facts: On this show, two of the “Housewives” bragged repeatedly about getting together during the day to drink excessive quantities of wine and then urinate in bushes around their Dallas neighborhood.

Although these two “worst” shows were both reality shows, an analysis of the year’s reviews also reveals that debuts of scripted TV shows far outnumbered reality shows this year.

Among the scripted shows that fared worst here were “Of Kings and Prophets,” a ridiculous and ill-considered ABC drama set in the ancient world during the reign of King Saul; “Feed the Beast,” the AMC drama series starring David Schwimmer as a sad-sack restaurateur; and “BrainDead,” a brain-dead summer drama on CBS that was supposed to be a parody of Washington politics. Sorry, CBS, but we were already in the throes of one of those. It was called “the election.”

Other dramas were noted for how depressing they were -- a trait that has become all too common. One was the series called “The Family” on ABC, which was about a lost child who returned mysteriously after an absence of 10 years, during which he appeared to have been repeatedly sexually assaulted by a pedophile who kidnapped him. The only thing more depressing than this show was the experience of actually watching it.

The same went for “Game of Silence” on NBC -- a show about a group of young adults who were involved in a heinous crime when they were juveniles some years back and were similarly abused while serving sentences in a penal facility for boys. How anyone could consider this kind of thing to be entertaining is a concept beyond my ability to understand.

I will admit I gave negative reviews to a number of shows that ended up earning orders for additional episodes, and in some cases, renewals for a second season.

This list includes: “American Housewife” (which I labeled the worst of the new fall shows when it debuted on ABC), “Kevin Can Wait” (the Kevin James sitcom on CBS), “Bull” (also on CBS), the new “MacGyver,” “Westworld,” the FX comedies “Atlanta” and “Better Things,” and “Nightcap” (the comedy on the Pop network about a fictional late-night show).

What can I say? These shows all struck me as flawed in some way or another. But it’s like I always tell people: These reviews are really only one man’s opinion. They’re not meant to reflect how a great many other people might react to these shows, which is something I have never been able to predict anyway.

Besides, an opinion, by its very nature, cannot really be wrong, can it?

tv
6 comments about "I'll Drink To That: The Worst TV Shows Of 2016".
Check to receive email when comments are posted.
Read more comments >
Next story loading