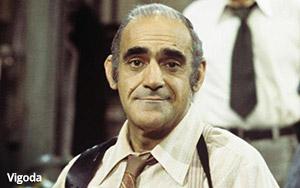 You don’t get to meet all of them, no matter how long you toil on the TV beat. But you do cross paths with a great many of them. With that in mind, here are some personal memories of some of the TV legends we lost in 2016.

Abe Vigoda will be known forever for playing Detective Phil Fish on “Barney Miller,” but he was also a fixture of our Manhattan neighborhood.

He was a very pleasant fellow who you would see strolling on Third Avenue on the Upper East Side. One day a few years ago, we ran into him on the West Side and he agreed to pose for a photo in which he is seen smiling genially. He may have already been 90 or more years old, but he was evidently an active guy. He died last January, age 94, and his neighborhood misses him.

Garry Marshall was an active alumnus of Northwestern, and when I was a student there in the late ’70s, I encountered him twice.

One was a talk he gave in the company of Jerry Paris, who played next-door neighbor Jerry Helper on “The Dick Van Dyke Show,” on which Marshall was a writer. Paris directed hundreds of shows for Marshall -- most notably “The Odd Couple” and “Happy Days.”

Another time, I found myself on the opposing team in a student-alumni softball game against Marshall and his frat, which was next door to ours. I was thrilled to meet him, but I think I came on too strong when I introduced myself because he seemed to tighten the grip he had on a bat he was holding at the time. Marshall died this year at age 81.

I possess a photo that I prize in which I am seen in conversation with Jerry Stiller and two companions who were sitting with him at a table at an event I attended in New York in 1986.

The two were Bob Elliott and Ray Goulding, the great Bob and Ray. I have no idea if this is what happened, but the expressions on our faces in the photo make it seem as if I was making them laugh -- which is hard to believe. Bob Elliott died this year at age 92.

In another photo in my not-very-vast archives, I am seen in the company of Joan Laurer, better known as “Chyna” from the World Wrestling Federation. It was in New York some time in 2001. She is smiling broadly, holding a wrestling championship belt and wearing a shimmering gown. Sadly, she died this year at age 46.

I interviewed Joe Garagiola in January 2003 when USA Network dropped him from its annual coverage of the Westminster Kennel Club Dog Show. On the phone, I asked Joe, then 76, what he learned from working the dog show for nine years. “The dog people have a great expression,” he said, “and I wish that the world would adopt it: ‘I’d like to be the kind of guy that my dog thinks I am’.” Joe died this year at age 90.

I caught up with Doris Roberts in September 2003 for a face-to-face interview in New York and we talked about money. A year earlier, she had held out for more money in a contract dispute.

“It's tough to hold out,” she told me. “They warn you that they will fire you. I was told last year by [then-CBS President] Les Moonves – he listed the people who have been fired, on the phone -- Erik Estrada, Suzanne Somers, Valerie Harper -- he listed all of them. …

“He said, ‘It's going to get ugly, kid.’ And I said, ‘Well, Les, I don't know how it's gonna go down. I gotta tell you that I've had the best six years of my life [in the role of Marie Barone, Raymond's mother on “Everybody Loves Raymond”]. This character's put my career over the top. I will always be grateful to you for that opportunity. I love you and good-bye,’ and I hung up.” Roberts, who died this year at age 90, won the dispute.

In 1987, I met the character actor Jack Riley at a radio convention in Anaheim in the company of two friends of his -- Jesse White, the actor best known as the original Maytag repairman, and Gary Owens, the long-time L.A. radio personality and “beautiful downtown Burbank” announcer on “Laugh-In.”

Riley struck me as a dour guy who seemed very unhappy -- a trait not uncommon among some comedians and comic actors. By contrast, his two friends were jovial and entertaining -- making for one of the greatest evenings I have ever spent in this profession. Riley, who was best known for playing an irascible patient of Dr. Hartley's named Elliot Carlin on the old “Bob Newhart Show,” died this year at age 80.

I interviewed Garry Shandling over the phone some time in the 1990s, and he was combative, contrary, uncooperative and unfriendly. Based on this interview and others that I conducted around the same time with a handful of comedians who were just as unpleasant, I instituted a self-imposed ban on interviews with comedians that I honored for about 10 years (the comic who broke the ban: Dana Carvey, who was a great interview).

Shandling's contribution to comedy and to television is undeniable, however. His sudden death last March at age 66 stunned us all.