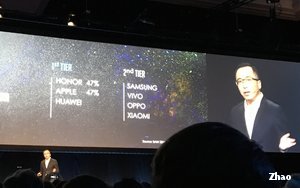 At least one company at CES thinks it can change the smartphone market.

Honor, a brand of Chinese powerhouse Huawei, which made the last Google Nexus phone, introduced a new phone for the U.S. market at CES and backed it up with stats.

In his presentation in a massive (and massively packed) hall, Honor President George Zhao said the company targets young people and sold $320 million worth of the company’s last phone in the one-day Singles Day in China.

The new phone has a dual-lens camera, can do night photos, has high-speed charging, can share Wi-Fi with four other phones and can handle more than 11 hours of video watching or 70 hours of music playing on a single charge.

The way it was presented made it seem like it was a high-end camera that also could provide phone functions.