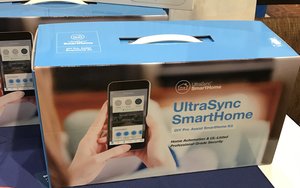 LAS VEGAS -- Just as last year, many smart security systems were on display throughout CES this time around.

However, the argument for various segments of the market were more clarified this year.

For example, at one display, Carrier, of air conditioning fame, showcased its home security system as part of its Cor Home Automation setup. The argument from Carrier is that the system is sold only through known and consumer-trusted Carrier dealers.

Representatives at similar displays from ADT and Brinks made similar arguments, basically that most consumers want to deal with known and trusted suppliers for home security systems that experts come in and install and later maintain.

Within the same display arena was UltraSync Smart Home, a company whose representatives argued that consumers want to buy and install the systems themselves.

That company has a one-box package labeled ‘A DYI Pro Assist SmartHome.’

Of course, consumers will choose the approach they feel is most comfortable to them.

The likely end result, at least for the foreseeable future, is that consumers will have plenty of choices and not even Google or Apple will dominate that market.