What Really Swung The Election -- Hint: You Reddit Here First 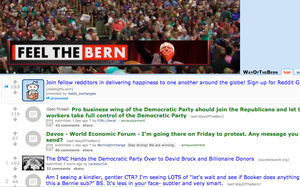 More than Facebook, Twitter, Snapchat or any other social media channel, it is news-sharing community Reddit that may have swung the 2016 election -- for better or worse -- said Revolution Messaging’s Jenn Kauffman.

Kauffman, who handled the media for Bernie Sander’s relatively successful primary campaign, said her team got some of the most keen insights -- as well as their tagline -- simply from following what users were saying on Reddit.

“The origins were in Reddit,” she said, citing for example, that “Feel The Bern” came off of sub-Reddit conversations.

“We adopted it as an official campaign slogan,” she conceded.

She also noted that there was a far more horrifying indicator that might have predicted the presidential campaign outcome: “If you went on Reddit, you could see there was so much vitriol against the establishment.”

Among other things, she said sub-Reddits comprised of “racist channels and sexist channels” were a troubling signal.

“We had a window into that,” she said in hindsight, adding, “We just didn’t take it seriously.”
1 comment about "What Really Swung The Election -- Hint: You Reddit Here First".
Check to receive email when comments are posted.
Next story loading