Man Who Live Streamed Son's Birth Presses Claims Against ABC, Yahoo And Others 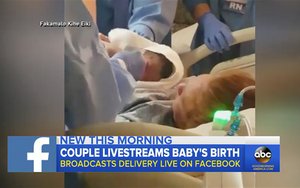 A man who broadcast a live stream of his son's birth on Facebook says he should be able to proceed with a copyright lawsuit against ABC, Yahoo and other outlets that broadcast a snippet of the video.

ABC, Yahoo and other outlets "immeasurably and shamelessly benefited and profited from an error committed by a private individual at a time when he was most vulnerable and unsuspecting," Kali Kanongataa argues in papers filed late last week with U.S. District Court Judge Lewis Kaplan in Manhattan.

He is opposing the companies' request that Kaplan dismiss the case on the grounds that they had a fair use right to show a portion of the livestream.

Kanongataa drew worldwide headlines last May when he streamed his son's birth through Facebook Live. ABC's "Good Morning America" ran an item about the stream and showed a brief excerpt from the video, which had been widely viewed by then. The clip also appeared on Yahoo, which has a partnership with ABC. Other companies, including NBC Universal, also ran a portion of the stream.

Kanongataa subsequently said he thought his family in the Polynesian island Tonga would be able to view his son's birth, but didn't expect it to be seen by the public at large.

In September, he sued ABC, Yahoo, NBC Universal and other companies for allegedly infringing his copyright by showing a portion of the clip. ABC, Yahoo and NBC and several others recently asked Kaplan to dismiss the lawsuit at an early stage.

ABC and Yahoo argued in papers filed last November that its use of the clip was "transformative" and doesn't substitute for the original -- factors that judges consider when evaluating questions of fair use. They added that "Good Morning America" had to use a portion of the clip, in order to examine issues surrounding live streaming.

Kanongataa says in his most recent papers that ABC and the others haven't shown they made fair use of the material.

He argues that the Good Morning America hosts' comments about the clip didn't add any "new meaning, message or understanding" to the material.

"Society," he argues, "was not enriched nor where science or the arts enhanced as a result of whatever scant comments the hosts added to the video clips."

ABC, Yahoo and NBC are expected to respond to Kanongataa's arguments by Friday.