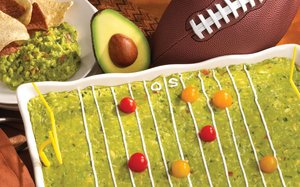 As Super Bowl LI gets closer and closer, fans can assume they’ll be fire-hosed with numbers, whether it’s how much ads cost ($5 million) or the chronological age of Grandpa Tom Brady (39.)

The most important numbers, though, aren’t point spreads or TV ratings, but the retail spending that infuses businesses around the country. And while the National Retail Federation forecasts that will decline a little this year, it is still likely to amount to $14.1 billion.

That works out to roughly $75 for each of the 188.5 million who plan to watch the Atlanta Falcons, which is making its second trip to the Big Game, against the New England Patriots on Feb. 5. Last year, the NRF called for spending to be roughly $82 per fan, for a total of $15.5 billion. About 76% of those surveyed intend to watch the game.

The biggest spenders are the 45 million or so who plan to host a party, which means big bucks on food and beverages, as well as team apparel. And about 8% of respondents say they’ll even buy a new TV for the event.

In-demand food items lean toward the traditional. Last year, for instance, experts estimated Americans would eat about 139 million pounds of avocados. And the National Chicken Council just released its annual wing report, predicting that the U.S. will polish off 1.33 billion wings over the course of the weekend, with some 75% consumed in restaurants. (Overall wing-munching is up 2% from last year, and 7% from 2015.)

But bars and restaurants also rely on the game for sales, with the NRF predicting that some 12.4 million will opt to watch this way. Takeout is also typically huge, with the National Restaurant Association reporting that 48 million people are likely to order out, and some 60% dialing up pizza.

Vegas bookmakers are giving the Patriots, with four Super Bowl wins, a slight advantage. But the game is only part of the fun. The survey, conducted for the NRF by Prosper Insights & Analytics and based on some 7,600 adults, finds that only 43% of those planning to watch say the game is the day’s main event. Almost a quarter—24%—like the commercials best, while 15% just like being with friends, and 12% think the half-time show is the best.