CBS Donut Sitcom Has Holes In It 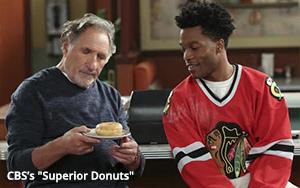 Who doesn't love a nice donut?

The answer to that question really depends on the donut place. For example, there’s a Krispy Kreme in Penn Station in Manhattan that I really cannot recommend. And truth be told, Dunkin’ Donuts has become wildly uneven -- the donuts and the famous coffee -- ever since the company’s stores began turning up on every other block.

Into the donut fray now marches “Superior Donuts,” a fictional, neighborhood donut shop on Chicago’s north side (a TV version, that is) where one can find traditional donuts, and hear plenty of conversations about the corruption and violence of the Chicago Police Department, and off-the-cuff comments about vaginas.

For those readers in the know when it comes to new TV shows and their networks, the latter identifies “Superior Donuts” as a new CBS comedy series. In the premiere episode airing this coming Thursday night (Feb. 2), it takes just a little over two minutes for the word “vagina” to work its way into this sitcom script, as a female graduate student suddenly and for no apparent reason describes donuts as “western culture’s culinary representation of the vagina.”

To which the shop’s proprietor -- played by Judd Hirsch -- retorts: “So what kind of vagina can I get you!”

Just over nine minutes into this episode, the word “sperm” makes its obligatory appearance as one character shares the tale of how he once went to a hospital to make a “fluid” donation and didn’t realize they were asking for blood, instead of -- well, you know –- sperm. The canned-laughter machine evidently found this to be hilarious because the volume on the recorded guffaws suddenly gets turned up to 11.

Let the record show that while vaginas come up in conversation in the first two episodes of “Superior Donuts” (that the TV Blog watched in advance of this review), the word “penis” was nowhere to be heard -- which might possibly be an historic first for a CBS sitcom premiere.

It should go without saying, but this donut-shop sitcom can stand all on its own without sperm and vagina jokes. The same could be said for the unfortunate potshots the show takes at the Chicago police.

“Superior Donuts” revolves around the efforts of this long-time donut maker to survive in a neighborhood (the Chicago community known as Uptown) that is gentrifying.

Into his shop strolls a brash young African-American man responding to a help wanted sign on the shop window. This fast-talking young black man (played by Jermaine Fowler) persuades the donut man to hire him, and then this 20-something makes attempts at bringing the shop into the 21st century so it can compete more effectively with newer neighborhood businesses such as an unseen Starbucks that has apparently opened up across the street.

One of the donut shop regulars is a cop (naturally) played by Katey Sagal. At one point in the premiere episode, the young black man -- named Franco -- goes to do some work and in the process turns his back toward the police officer. “I must really trust you,” he tells her. “I just turned my back on a Chicago cop!”

To which she replies: “I’m not going to shoot you. I have my body cam on!”

What do the comedians ask about jokes told in reference to tragic events? “Too soon”? In this case, yes -- and tasteless too. In Episode Two, airing next Monday (February 6), the entire Chicago police force is described as corrupt -- a statement positioned as something everyone in Chicago knows.

Despite all of these shortcomings, there is something likable -- or at least potentially likable about “Superior Donuts.” It could be that the show’s unfortunate references to the various topics mentioned above merely represent the show’s writing team working out their various neuroses here at the outset of this show. In future episodes, maybe they’ll stow these away somewhere.

Among the brighter characteristics of this show is its apparent low regard for Millennials who come to this donut shop in search of cronuts and mochaccinos that this donut baker refuses to offer.

When one snooty young woman asks for a “grande mocha macchiato,” Franco translates: “That’s Italian for overcharge me. I’m a pretentious Millennial!” Cue the laugh track.

tv
3 comments about "CBS Donut Sitcom Has Holes In It".
Check to receive email when comments are posted.
Read more comments >
Next story loading