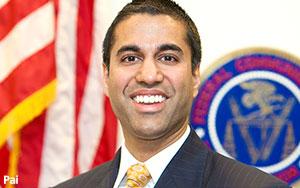 The news came late Friday, when Pai announced that the agency was closing an investigation into decisions by AT&T and Verizon to exempt certain video streams from customers' data caps. The move comes three weeks after former FCC Chairman Tom Wheeler criticized the initiatives as potentially harmful to consumers and competition.

AT&T pioneered "sponsored data" in 2013, when it allowed companies to pay for their data to be exempted from consumers' monthly caps. But the company's biggest foray into sponsored data came in November, when it rolled out "Data-Free TV" -- a zero-rating program that allows wireless customers who purchase DirecTV to watch video through the provider's mobile app, without burning through their monthly data caps.

Last year, Verizon rolled out FreeBee Data, which lets companies arrange for their mobile content to be zero-rated. The company also zero-rates video streamed from its Go90 mobile app.

The net neutrality rules prohibit carriers from throttling or degrading content, and from charging companies higher fees for prioritized delivery. The rules also broadly prohibit carriers from engaging in conduct that hinders the ability of consumers and content companies to reach each other online. When the FCC published the rules, it said it would take a case-by-case approach to evaluating whether data caps -- and exemptions from them -- are harmful.

Net neutrality advocates argue that data-cap exemptions can ultimately harm consumers as well as online video providers. Advocates argue that broadband providers shouldn't deploy zero-rating initiatives in ways that give customers an incentive to watch video from affiliated companies, like DirecTV, at the expense of competing services like Netflix or Amazon Prime.

Pai, who dissented from the net neutrality order, said last year that he disagreed with the criticisms of the wireless carriers' zero-ratings initiatives.

He said on Friday that the zero-ratings plans "have proven to be popular among consumers, particularly low-income Americans, and have enhanced competition in the wireless marketplace."