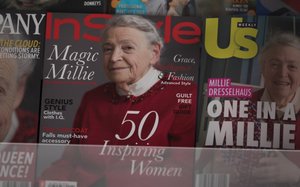 GE imagines a world in which female scientists are revered as much as movie stars and other icons around the world in a new commitment to encourage more women and girls to participate in STEM education and careers.

A new commercial (from agency BBDO) envisions a world in which girls are excited to receive a “Millie” doll, a gray-haired woman in a red jacket and black slacks, as a present, wear “Millie” Halloween costumes, and are named “Millie,” as much as they are Kristen, Kirsten or Kristy. The image is also turned into an emoji, which a young woman uses to show she “aced physics.”

At the end of the commercial, the “Millie” imagery is revealed to be modeled on Mille Dresselhaus, the first woman to receive the National Medal of Science and Engineering, as she inspires giant crowds and gets a standing ovation for science lectures.

“With Millie, we’re imagining a world where brilliant women are the stars,” GE CMO Linda Boff tells Marketing Daily. “We want to help create that world and use the power of our brand to add urgency to an important goal: get more women in STEM roles and keep them there.”

To that end, GE is making a public commitment (noted in the ad) to have 20,000 women fill STEM roles within its company by 2020 and having 50-50 representation of women in all of its technical entry-level programs.

“We are making several step-changes in our strategy to help us meet our goals,” Boff says, including expanding recruitment efforts to include colleges, universities and other institutions with a “more competitive gender mix,” internal processes to support more gender equality and testing ways to “hold our managers accountable” to the commitment.

The new commercial will launch during this week’s broadcast of “Saturday Night Live,” which will be hosted by Alec Baldwin, whose notorious impressions of President Trump have attracted more than a fair share of attention.

“As a brand, we will always try to meet our audiences where they are,” Boff says. The company will also look to “flip and lead the conversation” in other channels, such as taking over popular hashtags to promote stories of the company’s current female scientists and engineers, creating special science-themed emojis and using Spectacles to show the vantage point of women who build jet engines and other scientific projects.

1 comment about "GE Publicly Pledges To Hire Persistent Women".
Check to receive email when comments are posted.
Next story loading