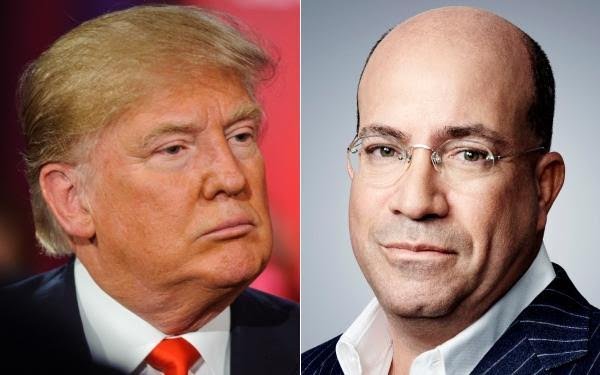 CNN President Jeff Zucker may or may not have been drawing a parallel between Donald Trump and the authoritarian regime in Venezuela when Zucker spoke out on Thursday about the Venezuelan regime’s crackdown on CNN this week.

Some stories that started to appear on Thursday afternoon following a lunchtime press op with Turner Networks execs in Manhattan made this interpretation.

The stories concluded that in talking about the Venezuelan government’s reaction to a CNN corruption investigation, Zucker was slyly equating the Venezuelan crackdown with a supposed “ban” instituted by the Trump administration against providing guests for CNN talk shows.

The TV Blog attended the same event and did not come away with this linkage at all. Not only did Zucker (photo, above right) talk about both subjects separately, he indicated that he wasn’t even sure an actual Trump “ban” was really in effect, even though various reporters referred to it emphatically as “the ban.”

And if there is a ban, Zucker was dismissive of it. “I don’t know if it’s a full ban on their part,” Zucker said to the roomful of reporters dining on halibut and filet mignon (there was a choice of entrée).

“It’s OK. We don’t feel that it’s hurting us in any way,” he said.“Our journalism has been leading the way in its coverage of this administration. We’re not being hurt in our ability to tell the story or to attract an audience.”

Indeed, Zucker indicated that the intense attention being paid to, and generated by, the Trump administration has been a boon to CNN’s ratings. He said viewership is up 51% so far this year compared to the same weeks at the beginning of 2016.

Zucker indicated that as he understands it, the so-called ban has really only affected CNN’s Sunday-morning public affairs show “State of the Union.”

“They have not been willing to put guests on our Sunday morning show ‘State of the Union’ for the last three weeks,” he said, while also noting that Kellyanne Conway appeared on “The Lead with Jake Tapper” just last week for a confrontational interview that lasted 25 minutes.

Zucker’s comments about the Trump administration came during a Q&A portion of this luncheon some 16 minutes after he made a few opening remarks about the situation in Venezuela.

According to Zucker, the government there this week took CNN En Espanol “off the air” following investigative reports last week that alleged that the Venezuelan government was selling fake passports through its Baghdad embassy, “possibly to terrorists.” The story traced this passport deal-making all the way up to the Venezuelan vice president’s office.

As a result, CNN En Espanol is no longer available in Venezuela, and the government is now threatening to block various other Spanish-language CNN networks and Web sites from the country.

“That’s an attack on freedom of the press everywhere,” Zucker said. “The reason they’ve done that is they are angry at CNN’s journalism. “That’s an issue of press freedom for all of us … That’s what happens when an authoritarian regime starts taking down feeds and blocking web sites just because we expose the truth.”

Time Warner’s pending merger with AT&T -- approved this week by Time Warner shareholders -- was also a big topic at the lunch, even if it was overshadowed somewhat by reporters’ questions about CNN and Trump.

“2017 is going to be another record year for us,” Martin said. “With the Time Warner shareholder approval occurring this week, we’re going to begin to start to meet and begin integration plans. We haven’t really started to do that yet.

“There is a great sense of excitement and enthusiasm within the employee ranks because if you think about what we’ve been trying to do at Turner, we’ve been trying to dramatically improve our data capabilities [and] our technology capabilities. … So if you think about AT&T, they’ve got massive consumer relationships with Directv and 130 million mobile customers [and] they have very significant technology platforms and significant data. And so the idea that’s exciting to us is the idea of supercharging the speed with which we can transform and innovate.”

“Better understanding of the consumer not only helps our advertising business, but it will also help our marketing business,” Levy said. “It will also help us [in] developing our programming, when you have that kind of information. So it’s exciting to have that opportunity in front of us, and looking forward to the upfront this year.”