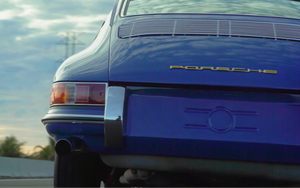 “Decades of Disruption” will air in prime time on CNBC on February 25 and 26 at 6:30 p.m. EST/5:30 p.m. CST. The 27-minute documentary also tells the story of how that legacy inspired the 2017 Porsche Panamera luxury sports sedan.

A nine-minute advance screener of the documentary is on Vimeo.

Conceived by Cramer-Krasselt for Porsche, the documentary is content created to complement and support the new Panamera, coming this spring. C-K, in partnership with media AOR, PHD, pursued a cross-platform approach with CNBC to bring the documentary to a highly targeted audience in broadcast and digital, according to the agency.

As with past campaigns, such as the hologram and interactive ads from last year, C-K and Porsche have focused on creating innovative and experiential content for the viewer, according to the agency. Now, in the film format, the brand bolsters its story of disruption and gives enthusiasts a behind-the-scenes look at the new Panamera.

Porsche historian Dieter Landenberger and Porsche engineers also are featured. Footage was shot at the all-new Porsche Experience Center in Los Angeles, The Porsche Museum in Stuttgart, Germany, and at Research and Development for Porsche in Weissach, Germany.