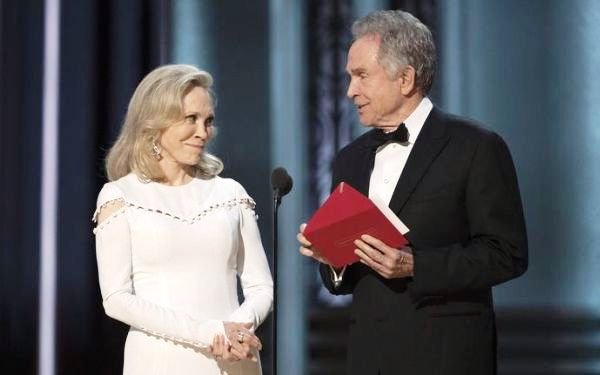 It was a night unique in my personal annals of Oscar-watching, and not only because of the epic foul-up that closed the show.

That socko finish certainly sent the big show over the top. It was a life-affirming moment that restored one’s faith that you’re never too old to see something new.

I am referring to myself, not to Faye Dunaway and Warren Beatty, the aging stars who found themselves at the center of possibly the most notorious snafu in the history of awards shows, if not live television generally.

It is a symbol of our ageist society that many people doubtlessly leaped to the conclusion that Faye and Warren had had a senior moment before an international TV audience when they mistakenly declared “La La Land” as last night’s Best Picture winner.

For the record, Faye was the one who actually blurted it out, although she seems to have been aided and abetted by Warren.

However, news stories that appeared in the hours after the show clearly laid the blame for the chaos at the feet of an as-yet unidentified backstage producer, stagehand or accountant from PriceWaterhouse Coopers who may have handed the two stars of “Bonnie and Clyde” the wrong envelope.

Early Monday morning, the accounting firm claimed responsibility in a prepared statement distributed by ABC. “We sincerely apologize to ‘Moonlight,’ ‘La La Land,’ Warren Beatty, Faye Dunaway, and Oscar viewers for the error that was made during the award announcement for Best Picture,” the statement said.

“The presenters had mistakenly been given the wrong category envelope and when discovered, was immediately corrected. We are currently investigating how this could have happened, and deeply regret that this occurred. We appreciate the grace with which the nominees, the Academy, ABC, and Jimmy Kimmel handled the situation.”

The lesson learned: No matter how sleepy you become in the half-hour leading up to midnight, don’t bail on the Oscars until it’s officially over or you might miss something incredible.

What else was unique about last night’s Oscar telecast on ABC? From a personal standpoint, it was this: On Monday morning, I can find nothing to write a strong critique about. On the contrary, I found the whole thing to be very easy to take and even enjoy.

Maybe I’m going soft. I have been writing morning-after reviews of the Oscars since at least the late 1990s, and I have never failed to find a number of things wrong that I had no problem crabbing about.

This year, though, I feel differently. Perhaps it is because after nearly 20 years of writing these columns, I am finally realizing that the Oscars are impervious to criticism. They will always be overlong, some of the acceptance speeches will be loony, new experiments will go awry, and the host will have some good moments and some bad ones.

But instead of complaining about it this year, I feel more like just embracing it in all of its over-exaggerated weirdness. This new attitude may be due at least in part to Kimmel, who was a revelation as an Oscar host. He seemed to apply just the right touch to every segment he appeared in.

It was a terrific showcase for him as the telecast included some of his late-night show’s trademark bits such as “Mean Tweets” (read aloud by celebrities) and his (fictional) rivalry with Matt Damon.

Even Guillermo Rodriguez, the security guard and sidekick on “Jimmy Kimmel Live,” appeared in the role of usher, squiring a group of confused tourists into the Kodak Theater. The bit was awkward and also sweet, and it ran on too long. But it seemed to work anyway under Kimmel’s congenial guidance.

Somewhat surprisingly, the Oscar show didn’t feel as if it was hijacked by complaints and diatribes about Donald Trump and the current political situation, even though the subjects came up repeatedly in speeches, Kimmel’s jokes and even in a handful of commercials (most notably the New York Times “truth” spot).

It seemed just enough -- a far cry from the experience of last year’s Oscars, which played like a three-hour lecture about racism.

The tone of this year’s show was so different that you can amend last year’s angry #OscarsSoWhite hashtag to #OscarsSoCalm or even #OscarsSoFun. And isn’t that a welcome change of pace?