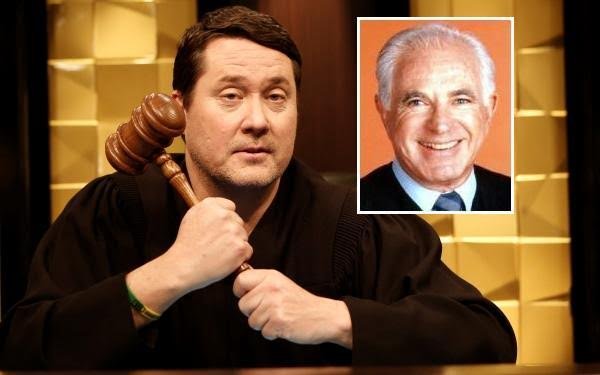 Then, just one day later, on Monday night, Comedy Central premiered its own version of a TV court show featuring a “judge” who gets high to help him render his decisions.

Are the two events related? Probably not, since there’s no evidence that Judge Wapner had somehow heard about this new show -- “The High Court” -- and then all of a sudden suffered a cataclysmic medical event. More likely his death at age 97 was a natural one.

However, this is the kind of coincidence that has the potential to enliven an otherwise run-of-the-mill TV Blog about this new stoner court show, which is now airing every night at midnight on Comedy Central.

With Judge Wapner’s death, a TV columnist can now examine “The High Court” in the context of “The People's Court,” the TV judge show that started it all with Wapner in 1981.

It is also an opportunity to present a photo of Comedy Central's new stoned judge -- “comedian” Doug Benson, seen with eyes half-closed in the photo above -- with a photo of bright-eyed Judge Wapner inset nearby.

We can also apply the juxtaposition of these two jurists -- one kindly and eminent, and the other high as a kite -- to a discussion of the decline of Western civilization, something which has been more or less ongoing for my entire lifetime.

Well, here it is in the guise of TV court shows. Judge Wapner had been a real judge. According to his obit in the New York Times the other day, he rose to become presiding judge over Los Angeles’ entire Superior Court system, supervising 200 other judges, before achieving TV stardom after retiring from the bench.

In interviews he conducted during his run on “The People’s Court” (1981-93), Wapner often said he was aware that he was setting an example for many people who watched him on the show but were unfamiliar with real judges. He was proud to represent judges on TV and comported himself accordingly.

Respect for Judge Wapner was widespread. Who can forget the devotion paid to Wapner and “The People’s Court” by Raymond Babbitt (Dustin Hoffman) in the 1988 movie “Rain Man”? I wondered the other day: Has anyone told Rain Man about Wapner's death? What was it he used to say? “Uh-oh, 15 minutes to Judge Wapner.”

Oh, well. Cut to the present day and “Judge” Doug Benson is seen on “The High Court” literally doing bong hits in his “chambers” (with each episode's “guest” bailiff) as he considers his decisions in a series of small-claims cases.

Comedy Central's press materials, along with an on-air message at the start of each episode of “The High Court,” indicate that Benson is really smoking real dope on this show. He is apparently permitted to do so under California law (as long as he has a prescription, I think).

“The cases are real, the judge is really high. This is ‘The High Court’ with Judge Doug Benson!” declares an off-screen announcer.

Other than his stoned demeanor, the show is set up just like an afternoon court show, with two litigants sparring over money owed for a damaged car or, in one case argued in an episode this week, a python that escaped through an open window while one man was supposed to be “snake-sitting” this reptile.

The network's press material also says the litigants in these cases are real, and have agreed to drop their suits in real courts in favor of coming to this one -- just like in other court shows.

It's the format that was invented for “The People’s Court.” The creation of that show -- which spawned a multibillion-dollar industry in subsequent syndicated court shows -- is credited mainly to a TV producer of the 1970s named John Masterson. Ralph Edwards and Stu Billett were the executive producers of the show.

Clearly, “The High Court” is not meant as a “real” court show, but more of a nightly parody. If nothing else, it likely seeks to take advantage of the widespread use of marijuana in the later hours of the evening, presumably by younger viewers who are not on a conventional work schedule.

To make it easy on this group's short attention spans, each episode of “The High Court” consists of one case, with the show itself running just 15 minutes (10 minutes without commercials), which itself is unusual for TV.

I wasn’t high when I watched three episodes in preparation for writing this column, but I laughed anyway -- as much about the ridiculousness of this show as the fact that somebody was putting it on TV in the first place.
tv
Next story loading