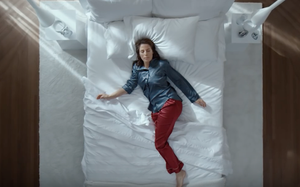 A good night’s sleep can make you feel like anything’s possible. And the mattress plays an important part in that.

In a new campaign, Tempur-Pedic lets people tell their stories of the effect of a good night’s rest, with the tagline “This Sleep Is Power.” The message is intended to illustrate that a good sleep leads to increased energy, enhanced capabilities, and a better waking life, says Craig Johnson, creative director at Hill Holliday, the agency behind the campaign.

“Most other mattress brands are focused on the sleep experience itself, not the benefit of what a great night’s sleep gives you,” Johnson tells Marketing Daily. “We’re not just selling things like comfort and the blissful feeling you get when you sleep on a quality mattress. To our audience, these things are table stakes. Our customers are looking to sleep as a means of self-improvement.”

The campaign, which will be supported by “record levels” of spending, features nine Tempur-Pedic owners speaking about how sleeping on a Tempur-Pedic mattress at night enables them to do extraordinary things during the day. One spot, for instance, features former Navy SEAL Andy Stumpf, who recently set a record for farthest distance traveled in a wingsuit.

The spot uses a match-cutting technique that connects shots of Stumpf in bed with images of him skydiving. In the spot, Stumpf tells of combat shrapnel left in his body, leaving him with an inability to sleep on his left side without a Tempur-Pedic mattress.

Another spot features Paralympian Michelle Salt, who notes that her body is not like everyone else’s, and having a Tempur-Pedic mattress makes a difference in conforming to her needs. Additional spots will feature similarly “interesting and inspiring” real-life owners, Johnson says.

“It was very important to our client that we use real Tempur-Pedic owners for the campaign,” Johnson says. “The company is passionate about donating mattresses to deserving organizations, including thousands of military recipients. It's an ongoing commitment to delivering life-changing sleep to our nation’s heroes.”

The spots will run on networks such as HGTV, CNN, ABC, NBC, E! and History. In addition to the national television spots, the campaign will feature print, digital, radio and social.