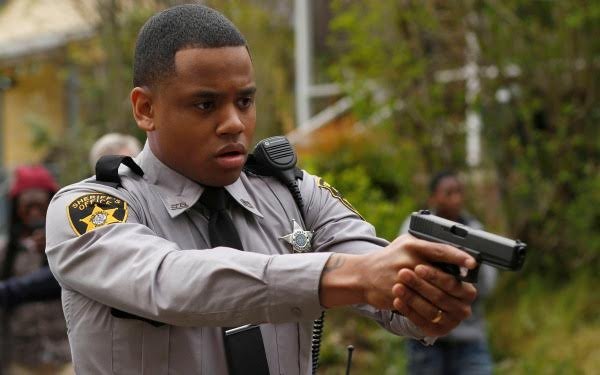 One of the more eye-rolling comments you hear from time to time emanating from various public personalities -- such as politicians running for office, or actors and actresses waxing earnestly on a red carpet -- is the idea that we need to have “a national conversation” about race.

News flash: We’re already having one. And it’s been going on for my entire lifetime (I’m in my 50s) -- much longer, in fact, because this issue certainly precedes my birthdate by a century or two.

Well, anyone who feels the need to participate in this continuing conversation is free to tune in Wednesday night for a new conversation-starter compliments of Fox -- the network known for all sorts of other socially conscious TV series such as “Empire,” “Masterchef,” “Scream Queens,” “Family Guy,” “The Simpsons,” “Son of Zorn” … I mean, the list goes on and on.

Who better than Fox to lead us into a discussion of race relations and police brutality? To do this, Fox presents a new “event” series called “Shots Fired,” in which a police officer -- in this case, a young sheriff’s deputy in a smallish southern town -- fatally shoots a teen who turns out to have been unarmed.

But wait -- there’s a gimmick here. The cop is black and the teen was white. Oh my -- this does complicate matters, doesn’t it? That’s only the start of the complications here.

Among other things, the black deputy (played by Mack Wilds) is the only African-American on this small police force.

The shooting in which he was involved took place in a black neighborhood. The deputy pulled over the white teen because the deputy assumed he was cruising in this neighborhood in search of drugs, as white teens in this town are known to do.

In other words, the deputy racially profiled this white teen. And as everyone knows, racial-profiling is bad.

To make matters worse, about midway through Episode One, a home video surfaces of this deputy at a backyard party celebrating his hiring by the sheriff’s department by joking that he now has a license to “shoot crackers.”

Whoa there -- shooting crackers is bad too! And I’m not even sure you’re allowed to use the word “crackers” in polite society either.

Into this racially charged fray step two representatives of the U.S. Justice Department -- a male prosecutor (Stephen James) and a female investigator (Sanaa Lathan) who both happen to be black. Among the things they have to do is interact with and interview the white sheriff and his deputies. This may or may not present a challenge (I’m guessing the former).

They also get drawn into a parallel case they didn’t expect -- the death some weeks before of a black teen that nobody seems to want to talk about. Is the nearly all-white sheriff’s department covering up this killing because white deputies did it? It could be.

The mix of personalities involved in this complicated racial, regional stew include the hard-charging governor of this state played by Helen Hunt. Adding to the star power, Richard Dreyfuss turns up in Episode Two in the role of some sort of rich real estate developer.

Both Hunt and Dreyfuss occasionally affect Southern accents, but their commitment to this aspect of their performances seems suspect and halfhearted.

The series covers all the angles you would expect from such a storyline, including the paranoia of the black residents of various neighborhoods where the intentions and tactics of the sheriff’s department is concerned, the participation of black clergy in staging “Black Lives Matter” protests, and the now-familiar sight of onlookers videotaping police with their phones as the cops “interact” with their neighbors.

To give the show its due, the white-black reversal gimmick does represent a new way of looking at this issue. And the show’s many complications drive the point home that these kinds of cases are not always as black and white as they seem.

Clarification: MSNBC’s exclusive telecast of part of Donald Trump’s 2005 filing referred to in the March 17 edition of the TV Blog (“The Nut And The Ninny: NBC's Maddow/Fallon Problem”) was actually a scoop by investigative journalist David Cay Johnston, who received the document from an anonymous source.