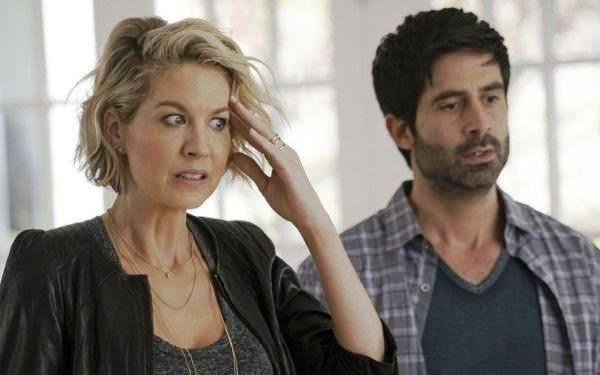 The headline on this TV Blog pins the family-comedy formula on ABC, but the way modern families are depicted today in TV sitcoms is common in network television generally.

ABC's new “Imaginary Mary” starring Jenna Elfman -- and premiering Wednesday night -- conforms to the formula in a number of ways.

Among other things, it contains at least two clichés that are so frequently used in shows like this that it must now be some sort of unwritten law in the community of family-comedy writers that these elements must be applied or else a writer must forfeit his family-comedy writing credentials.

These two elements are the dreaded narrator and the frantic breakfast. In “Imaginary Mary,” the narration is supplied by the voice of Rachel Dratch, who also “plays” the title character.

This character named Mary is an imaginary friend this grown woman named Alice (Elfman) dreamed up when she was six. Here in the present day, Mary is still a feature in Alice's inner life. Mary is a cute, furry creature of indeterminate species that appears in scenes with Alice via the wonders of CGI.

When new sitcoms begin with narration that explains things you can already see with your own eyes -- such as “Here is Alice. Here is Alice's house …” and the like -- a TV critic who has seen much too much of this stuff groans and rolls his eyes.

It doesn't exactly excuse the narrator in “Imaginary Mary” to acknowledge that using the imaginary friend as the narrator makes a little more sense here than the usual narration in sitcoms like this.

The fact remains, however: A narrator's voice grows tiresome very quickly. In “Imaginary Mary,” the furry CGI friend just won't shut up, though you might wish she would.

In Sitcom Land today, if not in real life, breakfasts are easily the worst meals of the day. In the clichéd “frantic breakfasts” of sitcom families, pancake batter is flung and spilled, arguments with teens always erupt, sips of juice or milk are always gulped quickly, and everyone is on the run.

Rule No. 1: Just like around swimming pools, there should be no running in kitchens.

Of the two episodes of “Imaginary Mary” that I previewed, the premiere episode sets the narration tone, and this show's requisite frantic breakfast opens Episode Two.

“Imaginary Mary” tells the story of a successful career woman (possibly in Chicago, although I am not sure of this), played by Elfman, whose parents' divorce when she was small made her swear off marriage and family life as an adult.

This plan goes off the rails when she meets a man who doesn't shave and she falls in love. This stubble-faced man happens to have three children, who apparently keep him so busy that finding time to shave presents a challenge for him.

The plot line in the first two episodes has to do with Alice's attempts to bond with this unshaven man’s children -- a teen boy, a teen girl and a younger daughter who looks to be in the fourth or fifth grade.

This season on TV, three children appears to have settled in as a family-sitcom cliché too. On CBS, there are three children in “Kevin Can Wait” and “Man With a Plan.”

Come to think of it, the guy who has no time to shave in “Imaginary Mary” is also a contractor -- just like Matt LeBlanc’s character in “Man With a Plan.”

As usual, I have no idea whether “Imaginary Mary” will work or not. My record of predicting the success or failure of network TV shows -- whether I like the shows or not -- is abysmal. I have admitted this many times here.

What can I say? I have no firsthand experience with frantic breakfasts or imaginary friends. Those of you who do are welcome to enjoy “Imaginary Mary” to your hearts’ content.