With F-Words And Ads, FX Has Become HBO With Commercials 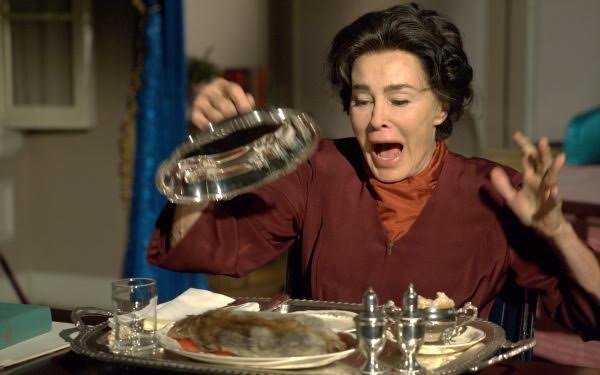 Anyone who watched the first four episodes of “FEUD: Bette and Joan” on FX through this past Sunday night might have been repeatedly surprised by the language.

Or maybe not. Apparently, FX shows have been airing the f-word at least since “The People Vs. O.J. Simpson” last winter. It is so common in everyday speech -- on the streets, in movies and on pay cable -- that its use in “FEUD” does not seem to be drawing any complaints.

The number of times the word has been heard in “FEUD” (starring Jessica Lange as Joan Crawford, photo above) might represent a new level of achievement in the application of this word, which was once forbidden on what used to be known as commercial-supported television.

“FEUD” still has plenty of advertisers, and no news stories have turned up reporting on content-vigilantes lodging complaints with their representatives in Congress or the Federal Communications Commission (which probably doesn’t have jurisdiction over this particular aspect of basic cable anyway).

Of course, the word’s use has been commonplace on HBO and Showtime for years, if not decades. In a way, it is inevitable that it should migrate to cable’s commercial-supported tier as well, especially if some advertisers no longer raise concerns about this kind of environment for their messages.

Mitigating the corrupting effects of the f-word (and a couple of other formerly taboo words also being used in “FEUD”) is the overall quality of the show in which the word is being used.

Whether one loves “FEUD” or not (I don’t happen to love it), it is undeniably a “quality” production -- including casting, acting, writing, costumes, settings, and everything else that has been amassed to bring early 1960s Hollywood to life.

Clearly, the f-word in this show is not bandied about gratuitously. It is used in the manner in which we assume from the show that people used it in those days. Of all the characters saying it in “FEUD,” the champion is probably movie mogul Jack Warner, played by Stanley Tucci. Apparently, Warner was a profane guy. Message received.

Once upon a time, TV shows watched their language because of sponsor concerns, and in the case of broadcasters, government regulators. Broadcasters probably still can’t gravitate toward f-word use yet for both reasons.

But for some reason, the advertisers in “FEUD” are apparently OK with it. As a result, an interesting thing has happened: FX has emerged in recent seasons as an HBO with commercials.

While even FX’s most extreme shows have yet to really match HBO’s in sex, violence and language, some of FX’s content has come pretty close -- from “Sons of Anarchy” to “FEUD,” to name just two of them.

At the very least, it's possible to say of “FEUD” that it would look and feel right at home on HBO, except for the commercial breaks.

It’s a phenomenon I have not heard anyone in the TV business talk about yet. It goes something like this: If you’re FX, and you get to the point where your most prestigious original shows are on par with what the traditional pay cable networks -- HBO and Showtime -- have offered for years, you then face the challenge of presenting these shows with commercials.

Episode Four of “FEUD” this past Sunday on FX was a good example. Like previous airings of “FEUD,” Sunday’s episode was listed as running from 10 p.m. to 11:08 p.m. Eastern, giving a viewer the expectation that the episode will be a rich hour and eight minutes.

However, there were quite a few breaks, and some of them were pretty long. And the actual episode concluded at around 11:03, not 11:08. The remaining five minutes on the schedule was made up of commercials and scenes from the next episode.

So it wasn’t as if you got a “Sopranos”-like experience watching this episode of “FEUD.” Indeed, even “The Sopranos” tanked in syndication on basic cable (A&E) because of the way it was disrupted by commercials (and also edited for content).

Thanks to HBO, Showtime, Netflix and a host of other commercial-free program providers, people expect their “quality” shows not to have commercials. Personally, I would enjoy “FEUD” a lot more if there were no breaks, or if need be, limited commercial interruption.

tv
1 comment about "With F-Words And Ads, FX Has Become HBO With Commercials ".
Check to receive email when comments are posted.
Next story loading