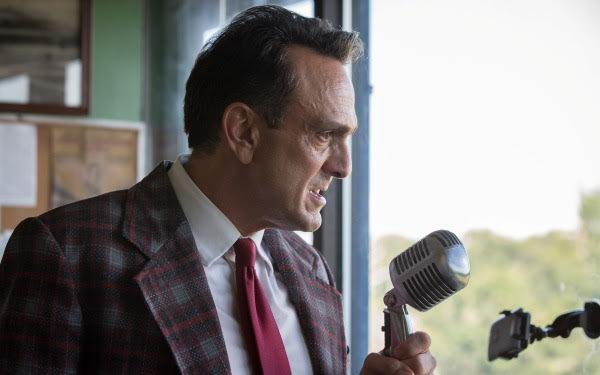 The only reason I did not sit here at my desk this morning binge-watching all eight episodes of the premiere season of “Brockmire” was because I was facing a deadline for writing this review.

Otherwise, I would have blown off everything on my to-do list in order to spend three more hours in “Brockmire”-land.

Thank you, IFC, for providing all eight episodes for preview. Perhaps I will get to the remaining six of them after my morning deadline.

I was able to watch the first two, though, and my conclusion is this: As one who habitually regards the world of TV comedies as something akin to a desert in which almost no life flourishes, “Brockmire” is like an oasis at the end of a rainbow.

I realize that’s a muddled metaphor because one does not customarily associate rainbows with deserts. However, the point is that “Brockmire” is about as rare as a rainbow in a desert. It is a TV show that made me say, “Hey, this is something different.” And also: “Thank Heaven.”

These reactions stem first from the situation that’s been set up for this situation comedy, which stars Hank Azaria (photo, above) as the title character, Jim Brockmire, a washed-up baseball sportscaster who takes a job in the lowest rungs of the minor leagues.

The team is called the Morristown Frackers, located in the fictional depressed town of Morristown, Pa. His boss is a 40-something woman who inherited this broken-down team from her late father. She is played by Amanda Peet. She and Azaria are great in this show.

Why get so excited over a situation such as this? Because it’s not another lame-brained sitcom about a “typical” American family. As readers of this TV Blog must realize by now, I’m sick of those (although you would be correct in pointing out that IFC would never be a network where you would find a broadcast network-style family comedy in any case).

Here’s something even more rare for television comedy: The writing on this show borders on literary. It is very refreshing to hear the dialogue and realize that a team of TV sitcom writers actually seemed to have worked hard on it for a change.

His drunken, on-the-air description of what he saw was so profane that he was fired and basically blackballed from working on U.S. TV or radio ever again. He spent the intervening years wandering the globe picking up jobs calling all sorts of exotic sports (including cockfighting), and consuming prodigious quantities of drugs and alcohol.

Somehow, the owner of the Morristown Frackers found him and lured him back to the U.S. to call her team’s games -- a gambit she felt would help boost attendance since Brockmire and his on-air meltdown had gone viral on YouTube.

His new job is so pathetic that the team doesn’t even have a radio contract. So Brockmire’s play-by-play announcing goes out only over the stadium PA system, heard by, at most, two dozen people in the stands per game.

“You know what’s not helping my suicidal depression?” Brockmire asks the Frackers’ owner while he drinks at a local bar which she also happens to own. “Calling baseball games into an empty stadium and having my own words bounce back into my face like some sort of haunting metaphor for life’s futility.”

I hereby invite anyone and everyone (that is, everyone of a mature age because this comedy is definitely R-rated) to join me in “Brockmire”-land for the next eight weeks starting next Wednesday.

So far in 2017, this is the best new TV comedy series to come along. It is possible that I will still be saying that at year’s end.

And FYI: The premiere episode is already available for all to see on IFC.com.

tv
3 comments about "IFC's 'Brockmire' Is The Best New Comedy Of The Year So Far ".
Check to receive email when comments are posted.
Read more comments >
Next story loading