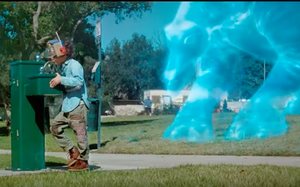 AT&T is using the Masters golf tournament (and its longtime sponsorship) to introduce a round of commercials designed to showcase how the company supports businesses, is committed to U.S. veteran hiring and offer a glimpse into the future.

The company is airing five new ads (from agency BBDO) during the tournament broadcast this weekend on ESPN and CBS. The company has been a Masters sponsor since 2005 and has typically used it as a vehicle to launch new campaigns, as it did with its “Power of &” campaign from last year.

“The campaign really brings to life how we enable agility for our customers,” Sandra Howard, vice president of corporate brand marketing for AT&T, tells Marketing Daily. “It’s especially effective at reaching our business customers, which are the focus of three of the new ads.”

The new ads continue AT&T’s promotion of corporate-sponsored golfer Jordan Speith (in a commercial honoring AT&T’s commitment to hiring 20,000 veterans by 2020, in a scenario where the professional hits the links with retired Army sergeant Saul Martinez, who lost both legs in combat). The three business-targeted ads depict how AT&T supports businesses in manners such as helping first responders connect with medical professionals while on the site of an accident; providing secure networking for e-commerce and financial markets; and working with farmers to improve irrigation techniques. The spots also end with a tag calling out a new operational brand, “AT&T Business,” Howard says.

“They show how we’re investing in our network and capabilities to meet the evolving needs of our business customers today and tomorrow,” Howard says. “We’re transforming not just ourselves, but the industry and the experiences we deliver quickly and efficiently.”

The final spot of the campaign (see below) touts the future of wireless via an advanced 5G network. In a 60-second commercial, the spot shows a girl putting on a homemade VR helmet to envision a future in which coffee is delivered by drones, cars drive themselves and holographic dinosaurs appear in a park.

“5G is the next big technological evolution,” Howard says. “It’s a game changer. It’s the future. And it’s closer than you think. We wanted to share the possibilities enabled by 5G with the big audience that tunes into the Masters.”