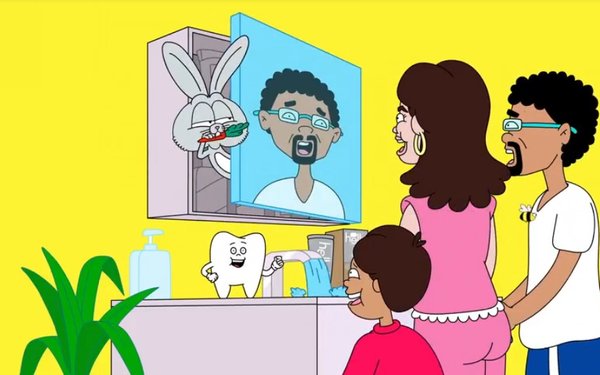 Any idea what’s really lurking in your toothpaste? Hello, a new natural products brand, doesn’t think so. So it’s going full-throttle cute to blow the whistle on mainstream brands in the $3 billion oral care market, with a digital campaign focusing on the natural ingredients it uses in its toothpastes, like coconut oil, aloe and plant-based sweeteners.

Called “An Inconvenient Tooth” (see? cute!), the animated spot features a moderately outraged molar who tells a grossed-out family just how much bad stuff they’ve been brushing with, including saccharine artificial dyes and propylene glycol, the chemical used to de-ice planes.

“Our research showed us that as aware as consumers are about ingredients in other products, they really haven’t gotten around to thinking about what’s in their toothpaste,” says Joshua Nafman, who joined the Montclair, N.J.-based startup as VP/marketing five months ago. Hello, which also makes toothbrushes and breath spray, is based on founder Craig Dubitsky’s observations that other brands treat people’s mouths as a kind of a “war zone, talking about killing and fighting odors, germs and bacteria.” The goal was to change that and build a friendly brand. (Hello was the friendliest word Dubitsky could think of.)

Nafman acknowledges that convincing consumers to back away from the standard imagery of white-coated dentists at war with plaque “won’t be easy, but it’s worth a try.” While the product does carry the symbol showing it’s been proven safe by the American Dental Association, that detail is less likely to get noticed than, let’s say, the hopping bunny that promises the product hasn’t been tested on animals.

He says the decision to use animation grew from its determination to target Gen Y, typically the most open to natural and niche products. “We know they lean heavily toward video and social media,” he tells Marketing Daily. “And we wanted to break away from the seriousness of the category, and bring the brand’s natural personality to life.”

Nafman expects the campaign to resonate with Millennials, who are already enamored of trends like coconut-oil pulling and in love with such chem-free brands as Method. (Dubitsky has worked on that brand, too, and also founded EOS, the spherical lip-balm company.)

Marketing Hello as gluten-free, vegan-friendly and cruelty-free also increases its appeal. Kids’ flavors include blue raspberry and bubblegum, “which taste so good kids rush to brush,” it promises. That positioning is helping reach young parents, he says. So far, the product has achieved distribution in such mass retailers as Walmart, Target, Kroger, and CVS.

The campaign, from 72andSunny, includes the video, which is scheduled to run on Facebook, Instagram and YouTube, as well as an influencer campaign. To increase sharing, the video steers users towards a free sample for themselves, and an opportunity to send one to a friend, as well.

Mintel says sales of oral care products in the U.S hit $3 billion last year, a 3.4% gain from 2014. (Toothpaste accounts for about 39%.) And while there’s plenty of resistance to natural products, with 20% of consumers saying they don’t work as well and 30% describing them as too expensive, 23% think natural oral care products are safer, 18% say they are better for teeth and gums and 20% wish mainstream brands had more natural offerings.

Tom’s of Maine, a chief competitor of Hello, gained 17% in sales in the last year, Mintel reports, largely because so many more people are paying attention to ingredients. “Consumers are demanding more information about a product’s ingredients and are more attuned to the perceived dangers of certain goods,” it writes in its latest report on oral care products. “This elevated concern surrounding product safety is certainly contributing to the success of naturally positioned brands like Tom’s of Maine.”